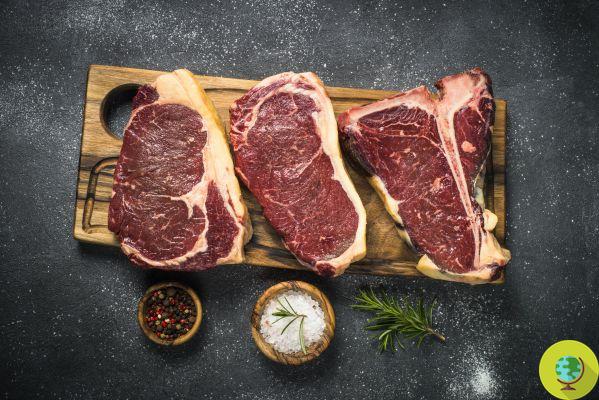 Human beings are becoming more and more carnivorous. The global movement of the most meat-rich diets that harm the environment, health and animals is led by major emerging economies, China and India in the lead.


Human beings are becoming more and more carnivorous. The global movement of the most meat-rich diets that harm the environment, health and animals is led by major emerging economies, China and India in the lead.

It was the French researchers who discovered the "significant" link between the World Bank development indicators and the increase in those who eat meat in different countries, analyzing the relationships between environmental, socio-economic health conditions and changes in eating habits. Overall, humans may become increasingly carnivorous, but the study also found they cannot be considered predators.

Research, published in the scientific journal PNAS, examines what people eat in different countries and, for the first time, also calculates the trophic level of humans - a measure in ecology that reveals our place in the food chain. Plants and algae are at trophic level one, as they create their own food, while herbivores are level two and animals that eat herbivores are level three. Carnivores that eat carnivores are the smallest population and are classified at trophic level four, while carnivores with few predators, such as polar bears or lions, occupy level five.

Sylvain Bonhommeau, of the French Research Institute for the Exploitation of the Sea, who led the research, explains and the global human trophic level (HTL) is 2,21. This value has increased over time, in line with the global trend towards a higher diet in meat consumption. National HTLs, on the other hand, range from 2,04 to 2,57 and reflect a wide diversity of diets, although the cluster analysis of countries with similar eating trends reveals only five main groups.

The populations of China and India, which traditionally have a diet rich in rice-based dishes, are getting richer and have therefore seen marked increases in trophic levels as they consume more and more meat. However, in places like Iceland and Mongolia, where people have a strong and heavy tradition of eating meat, fish and dairy products, the consumption of food groups that are now easier to find has increased.

As a result, people here are eating a little less meat than before. The researchers believe their study will help scientists better understand the human impact on resources and energy consumption. Bonhommeau, however, warns: if humans increase the trophic level again, there will be even more devastating consequences on ecosystems.

The hoax of vegetarians who kill more animals than those who eat meat
It is urgent to halve meat consumption: Unep invites us to become "demitarian"
Without beef, 4 billion more people would have enough food
Vegetarians of course: goodbye to meat by 2050
“Less, but better”: the right way to eat meat that will save the world?

Phthalates also present in shampoos and cosmetics are linked to an increased risk of premature death. The US study ❯

add a comment of Humans are eating more and more meat