How the processed food diet is changing the chemistry of the human body. I study

We already knew (or could have guessed) that consuming industrial foods or foods grown with the help of chemicals on a daily basis, but now a new study states that this type of diet is changing the chemistry of the human body.


“Tell me what you eat and I'll tell you who you are”, wrote Jean Anthelme Brillat-Savarin in 1826 in his work “Physiology of taste”. And confirming this has come a new analysis that shows that eating mass-produced food, grown with the help of synthetic fertilizers and of international origin, is changing the human body.

This, according to the researchers, who recently published the study in PNAS, is especially true for urbanized and wealthier communities and nations where annual per capita income exceeds $ 10.000 and where supermarkets provide most of the food.

To carry out the research, the team of scholars analyzed hair and nail samples of current populations, comparing them with archaeological data relating to people who lived before 1910, when synthetic nitrogen fertilizer, one of the pillars of the industrial agriculture.

The researchers specifically looked at the relationship between the different isotopes of nitrogen and carbon found in body remains.

What have they discovered? Experts have noted that the isotopic composition of nitrogen and carbon in hair, nails and bones has changed, making human beings today more similar to each other but very different from their ancestors who lived before the advent of agriculture. industrial.

"Dependence on international food distribution and industrial agriculture has changed the chemistry of the entire human race," said Michael Bird, lead author of the study.

Only communities that rely on subsistence farming have countered this trend, the authors point out, showing isotope ratios similar to pre-1910 human diets.

Carbon isotopes shed light on the type of foods people consume - a diet rich in corn or one in which rice is the staple will leave a different carbon isotope signal in human tissue.

In people who buy in supermarkets, where food comes from farms and intensive cultivation, nitrogen isotope values ​​are generally lower and fall within a narrower range. If you consume meat that comes from large industrial-scale farms or plants grown in monoculture fields with the help of fertilizers, the nutrients "arrive via an artificially shortened path".

"We have somehow short-circuited many of the natural processes that were used to prepare food for people in prehistoric times, or for people who still live a subsistence lifestyle" 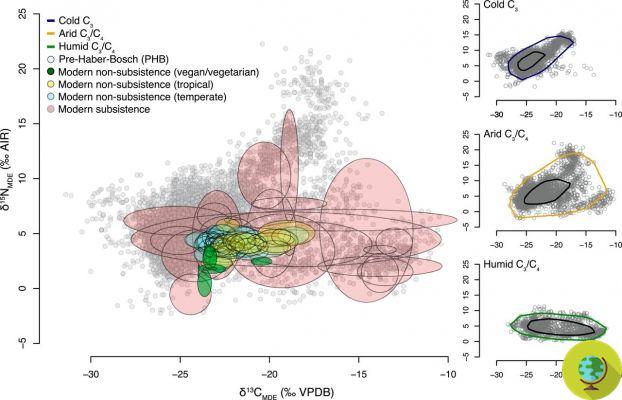 This change is not necessarily a good or bad thing in terms of health, the experts specify, but it certainly demonstrates how our food choices affect the body.

Furthermore, the problem with this mode of livelihood, separated from complex natural food chains, is a loss of resilience of global ecosystems in the face of accelerating environmental change, the authors argue.

Simplification of the food chain and over-reliance on one- or two-step food chains worry researchers:

Problems like severe plant disease, a locust invasion, or a pandemic can throw your entire system into chaos.

“Agricultural production and food consumption patterns should be diversified, which means that more different types of crops should be produced and consumed locally and globally. This would have nutritional, health and environmental benefits. We cannot restore agricultural technology to what it was 100 years ago. We need technology, including new technologies to feed and nourish the world, but we need more diversity and reduce the environmental footprint, ”said Dr Matin Qaim, agricultural economist at the University of Goettingen in Germany.

How Meditation Is Helping South African Students. I study ❯

add a comment of How the processed food diet is changing the chemistry of the human body. I study