How the meat lobbies manipulate us to hide factory farming

Some lobbies of the meat sector "act in a sprawling way in areas of public and private life": the complaint by Greenpeace.

Some lobbies in the meat sector "act sprawling in all areas of public and private life": Greenpeace's complaint against sector groups ready to do anything to prevent a decline in meat consumption


“Eat better meat”, “Don't do without animal proteins”. Commercials and slogans in schools, in doctors' offices, on social networks, on television, which leave little room for the imagination: the meat lobbies are infiltrating everywhere, even secretly, to push us to consume more and more meat, without necessarily distinguishing between industrial meats and ecological meats.

This is the complaint that comes from Greenpeace, which in a new report (How the meat lobbies manipulate us to convince us that intensive farming does not exist and that meat is needed every day) has focused on the tricks with which the meat lobby has responded in France to changing consumer tastes and European agricultural, food and environmental policies.

Read also: Intensive farms are time bombs, but Cop26 is forgetting about them (INTERVIEW)

Many trade organizations, in fact, promote the consumption of meat, arguing that it is by definition sustainable.

In reality they aim to make us believe that in France there are no intensive farming, and therefore they try to prevent the reduction in the consumption of meat necessary to respond to the climate emergency. This is what we have studied, say from Greenpeace France. 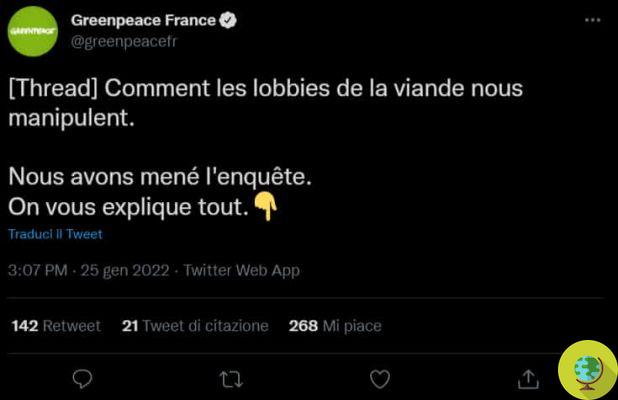 A "rampant" network of influence

In the report, Greenpeace identified 25 professional and inter-branch organizations that defend the interests of the meat industry and form "a sprawling network of influence". Thirteen of these are linked to the National Federation of Farmers' Unions (FNSEA), nine to the swine branch (Inaporc) and ten to the meat and livestock branch (Interbev).

Greenpeace notes, for example, that Interbev would have developed a strategy to influence children and young people, that Inaporc funds a parliamentary club called "Club des amis du porc" or that 60% of the budget of the National Interprofessional Association of the broiler poultry (Anvol), dedicated itself, in 2020, to communication. 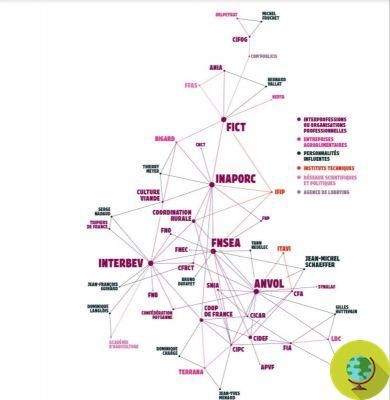 A real network, and through this communication the lobbies intend to "convince meat consumers who are concerned about their impact on the planet and on animal welfare", observes Greenpeace.

For their part, in practice, the meat sector affirms that "farms, even when they are industrial", are "an integral part of the solution to the climate and environmental crisis". And thus they are never presented "as one of its causes".

According to the NGO, producers play on the clichés of French values, highlighting "the myth of proteins", establishing "a link between meat and national identity" or - worse - making believe that "meat creates social bonds".

Greenpeace thus denounces, among others, the Interbev advertising campaign "Love meat, eat better" of 2020 and criticize the brochure "Health: don't forget meat!" distributed by Interbev in 2016 in 7.900 waiting rooms for healthcare workers. It also recalls how inter-professional organizations participate in numerous professional and public medical and nutritional events. 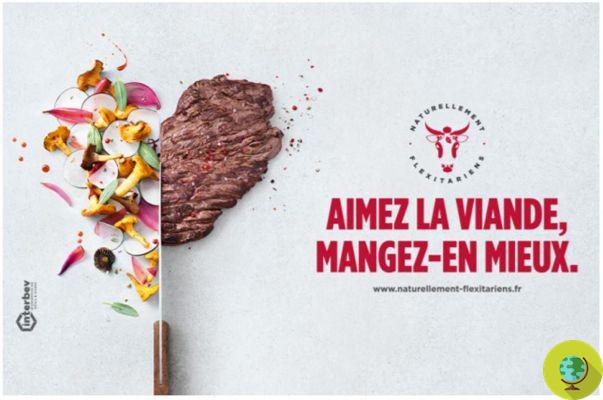 Europe finances advertising campaigns in favor of meat consumption and aimed at relaunching meat in Europe, reports Greenpeace. Over the period 2016-2020, over 250 million euros were allocated to campaigns to promote meat and dairy products. French organizations received € 68 million for the promotion of meat and dairy products, compared with just € 17 million for fruit and vegetables.

Read also: The EU invests millions of euros to promote the consumption of meat and dairy products: the sobering Greenpeace investigation

Meat therefore monopolizes 54% of all funds received for the promotion of agricultural products, to the detriment in particular of
legumes, fruit and vegetables. And, for its part, the FICT (Federation of industrial cured meat factories of pigs, restaurateurs and processors) has deployed a vast communication campaign of more than one million euros in Japan for importers, restaurateurs or distributors. Seminars were organized in Tokyo and Osaka, commercials sent to six regions, ads shown in online print, print and social networks. And it also spent around € 600 in Canada on similar actions in the 2020-2021 period. In both cases, according to Greenpeace, the campaigns were financed by the European Union - and therefore by the taxpayer - up to 80%.

The report released by Greenpeace is associated with an online petition to denounce the influence of meat lobbies on children. Sign the petition HERE.

HERE you can find the complete report.