The cocoa used by multinationals such as Mars, Mondelez and Nestlé is seriously endangering the rainforest of the Ivory Coast. This was reported by the Guardian who conducted an investigation into the deforestation linked to the chocolate industry

Il cacao used by multinationals such as March, Mondelez e Nestlé is putting the rainforest of the Ivory Coast at serious risk. It was reported by the Guardian who conducted an investigation into the deforestation linked to the chocolate industry.


According to the British newspaper, the worldwide chocolate industry is driving the deforestation of West Africa. Local traders supply multinationals with illegally grown cocoa within protected areas of the Ivory Coast, where rainforest coverage has been reduced by more than 80% since 1960.

The illegal product is mixed with "clean" cocoa beans in the supply chain. This means that Mars bars, Ferrero Rocher chocolates, Milka bars and many others could be contaminated with “dirty” cocoa. Almost 40% of the world's cocoa comes from the Ivory Coast.

Visiting the country, the Guardian reporters saw rainforests with cocoa plantations, visited farmer villages occupying allegedly protected national parks, and also spoke to local law enforcement officials, who often close a eye on infringements, also underlining how the big brands are indifferent to the origin of the cocoa.

Some traders have not denied that the cacao illegal wild deforestation has entered their supply chains.

Up to 70% of the world's cocoa is produced by 2 million farmers in a belt extending from Sierra Leone to Cameroon, but the Costa d'Avorio and Ghana they are real giants in the sector, the first and second largest producer in the world. At the same time they are also the biggest victims of deforestation. Ivory Coast is losing its forests at the fastest rate of any other African country: less than 4% of the country is covered by rainforest. Once, that percentage was 25%.

Mighty Earth has just released an investigation into the deforestation caused by chocolate in the Ivory Coast and Ghana, the outcome of which is even sadder. In fact, the local population is so poor that they cannot afford even one of the products containing cocoa, so loved elsewhere.

The new investigation by Mighty Earth, entitled "Dark Chocolate’s Secret"Found that a large amount of cocoa used in chocolate produced by Mars, Nestle, Hershey, Godiva and other companies is illegally grown in national parks and other protected areas in Ivory Coast and Ghana. The report documents how in several national parks and other protected areas, 90% or more of the land is used to grow cocoa.

In Côte d'Ivoire, deforestation has pushed chimpanzees to a few small areas and reduced the elephant population from several hundred thousand to around 200-400.

About half of the world cocoa market is controlled by three companies: Cargill, Olam and Barry Callebaut. According to the survey, cocoa passes from farmers in national parks, through intermediaries, to traders, who then sell it in Europe and the United States where the largest chocolate companies turn it into truffles, bars, syrups and countless other chocolates. 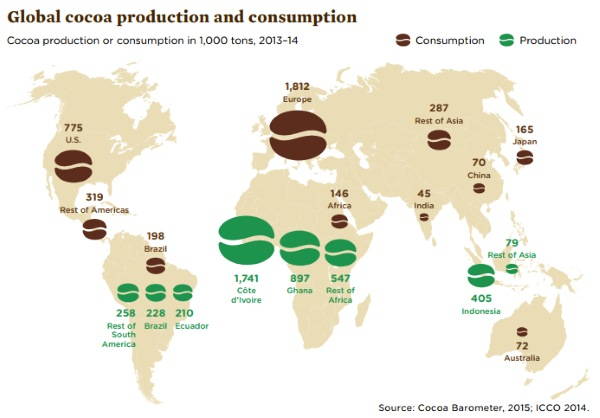 "The extent to which big chocolate brands like Mars are linked to the destruction of national parks and protected areas is shocking" said Etelle Higonnet, head of the Mighty Earth Campaign. "These companies must take immediate action to end deforestation once and for all and undo the damage."

After destroying the forests of West Africa, the chocolate industry has begun to take its model to other regions of the rainforest such as the Peruvian Amazon, the Congo Basin and the forests of Southeast Asia.

The ancient ones forests, once a paradise for the fauna wild like chimpanzees, leopards, hippos and elephants, they are virtually disappeared.

“Our country has become dependent on a cocoa industry that destroys forests and the full range of ecosystem services they offer. We must achieve asustainable cocoa industry that respects the forests and actually benefits the communities and economy of the country. Big chocolate companies must contribute financially and technically to support the government's conservation efforts, ”said Kouamé Soulago Fernand, Secretary General of ROSCIDET, a network of Ivorian NGOs specializing in environmental protection and sustainable development.

In media i growers of cocoa in Ivory Coast and Ghana are paid less than 80 cents (USD) per day and often work in dangerous conditions for many hours. The work juvenile it is still prevalent throughout the industry, despite the assurances of many multinationals.

A bitter story, which unfortunately we all know but which is ignored in the name of the economic interests of a few.