How Meditation Is Helping South African Students. I study


Transcendental Meditation is the most widely practiced technique (about 6 million people practice it) and most widely studied (about 600 scientific researches) among all the meditation techniques currently in vogue.

It is practiced to favor the development of human potentialities, in reality presumed, it was introduced in the West in 1958 by Maharishi Mahesh Yogi and is based on the repetition for a few minutes, twice a day, of a specific sound (mantra), which would lead to our body to transcend, leaving it in a state of total relaxation without thoughts.

All true? In fact, despite the numerous scientific publications, it is very difficult to prove that the practice actually stops thoughts. However, that this (like all meditation exercises) implies a certain degree of relaxation is quite well established.

And today we have one more piece: the technique seems in fact to fight post traumatic stress disorder, which is part of anxiety disorders and which arises following a very painful or shocking event in one's life, but also depression itself.

Lo study was conducted on 68 students who had already been diagnosed with the disorder: half of these, from the Maharishi Institute, were invited to practice transcendental meditation for 3 and a half months, while the other half, from the University of Johannesburg , did not receive any treatment.

And the results seem to leave no room for doubt, in a population particularly prone to this type of pathology. In fact, up to 25% of the population in South Africa suffers from PTSD, PTSD (for comparison, in the US, a percentage of 8% is estimated), probably because adolescents and children in the African country are relatively often witnesses or victims of violence of a criminal or domestic nature.

“A high percentage of young people in South Africa [...] suffer from PTSD - explains Michael Dillbeck, co-author of the study - To become successful students and productive members of society, they absolutely need help to cope with the symptoms of the disorder. post-traumatic stress. Our study shows that, after 3 months of meditation, this group, on average, was outside the diagnosis".

Within 15 days of starting work, in particular, the Maharishi Institute students showed a significant drop of more than 10 points in PTSD symptoms and also found relief from depression, assessed via the Beck Depression Inventory, a recognized test for "quantitative" measure of the pathology. 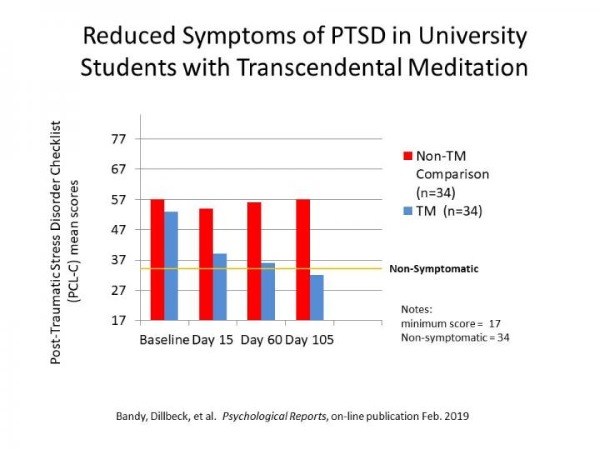 The test was also carried out at 60 and 105 days after the practice of transcendental meditation and there were no significant alterations: within 105 days (more than 3 months) the average group score for MI students was less than 34, considered the threshold for the diagnosis of PTSD.

Those who had not practiced the technique, however, did not show any significant reduction in symptoms of either depression or PTSD.

Does Meditation Eliminate Depression? This statement cannot be made, also because depression is often of neurobiological origin, but the study is a milestone (the first) for the development of possible other effective methods against what many claim to be the "disease of the century".

The work was published in Psychological Reports.

add a comment of How Meditation Is Helping South African Students. I study