How many pesticides do we have in our bodies? The shocking results of the Swiss urine test for adults and children 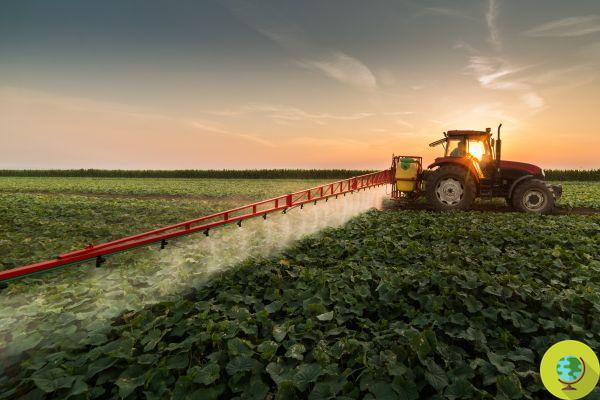 A new test rekindles attention to the problem of pesticides that we take in through food. A real cocktail that is harmful to health

A new test carried out by the Swiss magazine K-Tipp once again highlights the problem of pesticides which, in the form of residues, can be detected in the urine. Up to 17 pesticides have been found in adults and children together!

How many pesticides are found in our body? Too many! This is essentially the result of a test carried out in Switzerland on a sample of 30 volunteers, not only adults (men and women), but also children.

The two laboratories that used the magazine for the test analyzed the urine of all participants for the purpose of identify the possible presence of 60 pesticides, some of which are banned in the EU. Thanks to urinalysis, in fact, it is possible to monitor pesticides and other pollutants that have entered the body and have been absorbed by the body.

In the week prior to the test, half of the volunteers had consumed traditionally farmed food and the other half organically sourced food.

The results were not at all heartening: all people had large quantities of pesticides in their urine, in some even a simultaneous presence of 17 pesticides, some of which even banned. We talk about a real cocktail of harmful substances, also present in the urine of one of the children.

The bad news is that participants who ate organic were not exempt from the problem residues of pesticides, also found in their urine.

In some cases these were substances whose use is approved, even if they are not considered completely harmless, and in others, instead, active ingredients suspected of being carcinogenic, of causing genetic damage or damage to organs of the human body, or of being dangerous for the little ones.

For example, let's talk about the chlorpyrifos, insecticide accused of damaging the brains of infants even when taken in small quantities, found in the urine of all people who participated in the test. It is a banned substance in the EU but still permitted in Switzerland until the end of June 2020.

Victory! Europe bans Chlorpyrifos, the insecticide against the Asian bedbug that causes damage to children's brains

It was obviously not missing also glyphosate, whose traces have been found in about one third of the analyzed sample. Other previous tests had also identified the presence of the well-known herbicide in the urine of consumers and in France there are those who had decided to file a complaint for this.

Too much glyphosate in the urine: 45 people in Toulouse file a complaint

The problem is that, as K-Tipp points out, this test was not even exhaustive and therefore, probably, the situation is much worse than that presented in the results. In fact, the analysis concerned "only" 60 offending substances out of over 1400 registered in the EU database.

So commented Joëlle Rüegg, professor at Uppsala University in Sweden:

“People are constantly exposed to excessive amounts of chemicals. This is dangerous because many of these substances are harmful ”.

This is the situation found in Switzerland but unfortunately the pesticide problem is also serious in our country as evidenced by the Stop Pesticides dossier:

How glyphosate and chlorpyrifos are absorbed by the body: the study on Emilian farmers

Chlorpyrifos: according to EFSA, the pesticide cannot be considered safe

add a comment of How many pesticides do we have in our bodies? The shocking results of the Swiss urine test for adults and children