How good is a cup of chamomile tea? More than you expect! 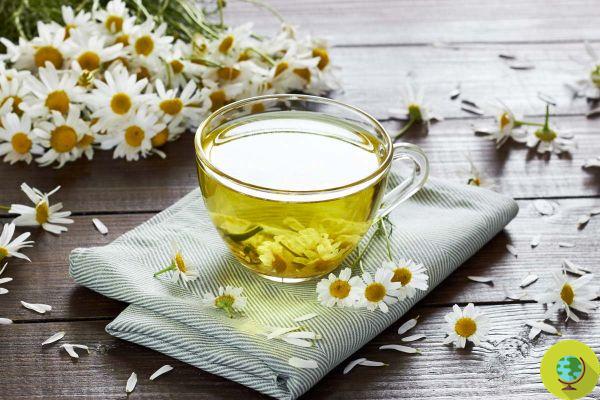 Chamomile is one of the oldest and most used medicinal plants by man as a natural remedy to relieve various ailments. Its dried flowers are rich in flavonoids that contribute to its medicinal properties, as experts pointed out in a study devoted to chamomile and its benefits.


The best known way to take chamomile is by preparing one tisane starting from its flowers, in the form of infusion or decoction. In the world, every day, we drink at least a million cups, especially to relax and sleep better. But the benefits of taking it aren't limited to the calming properties alone.

Let's find out, then, the properties and benefits of a cup of chamomile based on the studies and expert opinions.

According to a new study, chamomile helps us live better and longer. Scientists at the University of Texas took into consideration the effects of chamomile which occurred on a sample of 1667 subjects, between men and women. Drinking chamomile tea can help reduce the risk of premature death 29%. (Read also: Drinking chamomile prolongs life)

According to Dr. David Kiefer, chamomile contains some substances that prevent the aggravation of gastrointestinal disorders. Chamomile has, above all, a calming effect with respect to heartburn and stomach cramps. The chamomile infusion must be prepared with very hot water, but not boiling, so as not to damage the properties of the plant.

La chamomile tea it is one of the best known natural remedies to be able to sleep better and to defeat insomnia. Preparing a chamomile tea is very simple. The advice is to buy dried chamomile flowers from a herbalist's shop and use two teaspoons per cup. Here you find an interesting study on benefits of chamomile. (Read also Relaxing herbal teas: 10 recipes against stress and insomnia)

Chamomile to relax the muscles

Chamomile contains relaxing substances that calm the nerves and muscles. In particular, the infusion of chamomile is able to increase the levels of glycine present in the urine. Glycine is an amino acid that can calm down cramps and muscle spasms. Here more information.

A study published in the Journal of Agricultural and Food Chemistry highlighted chamomile's ability to relieve cramps and menstrual pain. As already pointed out, chamomile is able to relax the muscles, has a calming effect and is able to relieve pain.

Chamomile to fight cold and flu

Chamomile tea is considered to be a natural remedy that can help relieve cold and flu symptoms. In particular, breathing the vapors of the chamomile infusion would help to clear the respiratory tract. From this point of view its antimicrobial and sedative effects are considered to be very useful. Here more information.

Chamomile to stimulate the immune system

According to Elaine Holmes, chemist at Imperial College London, there are more and more studies showing that some very common natural remedies contain certain chemicals that are truly valid in the medical field. In particular, some substances present in chamomile can increase the antibacterial activity and stimulate the functions of the immune system.

A study conducted in 2014 considered the potential effects and mechanisms of action of topical use of chamomile oil - as it is traditionally prepared in Iran as a natural remedy - for headaches and migraines. Researchers speculate that chamomile oil may represent a 'new' medicine to relieve migraine-related pain.

Chamomile as a natural anti-inflammatory

A study conducted in Iran and published in the scientific journal Nutrition found that drink 3 cups of chamomile tea a day it could help improve blood glucose levels in people with type 2 diabetes. According to experts' conclusions, chamomile tea could help reduce the risk factors associated with the onset of diabetes.

How many pesticides do we have in our bodies? The shocking results of the Swiss urine test for adults and children ❯

add a comment of How good is a cup of chamomile tea? More than you expect!