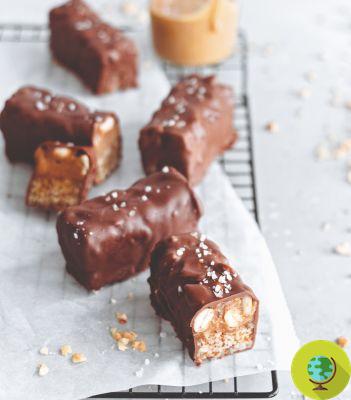 To pamper and comfort you, after these days of cold and rain, I propose the recipe for the "snicker" (the famous American peanut butter-based bar produced by Mars) in a vegan version. Compared to the original recipe, I added a biscuit inside and reduced the amount of sweetened cream, using ingredients that did not contain animal derivatives.

Recipe of the "Snikers". You have a sweet tooth sweet snacks, but do you prefer to do without it so as not to have to swallow crap? The solution could be to self-produce them, using homemade, healthy and zero-kilometer ingredients, preferably organic and vegan!

To pamper and comfort you, after these days of cold and rain, I propose the recipe for the "snicker" (the famous American peanut butter-based bar produced by Mars) in a vegan version.
Compared to the original recipe I added a biscuit inside and I reduced the amount of sweetened cream, using ingredients that did not contain animal derivatives.

This is not to say that the final product is absolutely healthy; for example, it is not suitable for diabetics or even for those with high cholesterol, but it is certainly less harmful and greasy than packaged industrial bars.

for the caramel toffee:
100 g of whole cane sugar
30 g of non-hydrogenated margarine (or butter)
60ml soy milk (or rice if you prefer)

for coverage:
100 g of vegan chocolate or alternatively 5-6 tablespoons of peanut butter

Prepare, first of all, caramel: pour the brown sugar into a saucepan and put it on the stove, over low heat, let it melt and mix well with a spoon, bring it to a boil and leave it on the stove for about 10 minutes, stirring often.

After 10 minutes, turn off the heat, add the margarine cut into cubes and the warm soy milk, mix well until the two ingredients have completely blended, then put the mixture back on the stove, again on a low flame, and mix. until the cream begins to amber: at this point, stir again for 3-4 minutes, then turn off the stove and let it cool.

As the caramel gets cold, prepare the shortcrust pastry that you will need for the central biscuit of the snicker: combine all the ingredients listed for the preparation of the biscuit and knead with your hands until you get a soft, uniform and elastic dough.
Wrap the dough with a sheet of cling film and place in the refrigerator for about half an hour.

After this time, rTake the dough and roll it out until you get a thick layer (about) a centimeter, cut it into many strips obtaining 10 bars about 2-3 cm wide and 10-12 cm long and arrange them on a baking sheet lined with parchment paper, bake at 180 degrees in a hot oven and cook for 15- 20 minutes (or until the bars are golden on the surface).

When the biscuits are golden brown, take them out of the oven and let them cool.

At this point, you just have to compose your snickers: spread a thick layer of toffee cream on each of the bars, even on the sides, level well with the back of a spoon and refrigerate to compact everything well (about 10-15 minutes).

After this time, take the bars from the fridge, spread a thick layer of peanut butter, both on the surface and on the sides, and put everything back in the fridge for another 10 minutes.

Then, yeschop the chocolate and put it in a small bowl, melt it in a bain-marie (without touching it and without ever boiling the water in the bain-marie); when the chocolate begins to melt, remove the bowl from the heat and mix it with a whisk until it becomes smooth and creamy.

Put the bars on a sheet of parchment paper, spacing them well, then pour the melted chocolate over the biscuits, leave to cool for 3-4 minutes, then refrigerate for about ten minutes.

If instead of chocolate you prefer peanut butter (as in the photo) spread another layer of peanut butter, decorate the surface with peanuts, refrigerate for at least 10 minutes and then bring to the table!

Do-it-yourself desserts: how to prepare the “twix” at home

Recipe of the vegan "fiesta"

Smudge stick: what it is and how to prepare the ancestral bunch of dried herbs that purify the house ❯

add a comment of Homemade "snicker": the recipe (vegan)