Homemade croissants and brioches with sourdough without hydrogenated fats

Homemade brioche with sourdough. Self-production also at breakfast and as a snack. These homemade brioches with sourdough are a nice idea to start the day on a sweet basis or for a mid-afternoon snack. In this way you can do without packaged brioches.

Self-production also a breakfast and a snack. These homemade brioches with sourdough are a nice idea to start the day on a sweet basis or for a mid-afternoon snack. In this way you can do without packaged brioches.

If you do not have sourdough available, at the end of the recipe you will find the instructions to replace it with brewer's yeast. Here are the ingredients and the procedure to prepare yours at home brioche with sourdough.

Choice between (for each brioche):

1) Cool the sourdough. Remove it from the storage container and transfer it to a bowl. Pour about half a glass of warm water and work it with your fingers or a spoon until it dissolves. Gradually add the flour and start kneading until the sourdough returns to the initial consistency. Divide it into two equal parts and place one in the refrigerator in the original container. Leave the remaining part of the sourdough, which will be the yeast for your brioches, in the bowl and allow half an hour to pass before starting the dough.

2) For the brioche dough Gradually add spelled flour, almond milk (or simple tap water), a pinch of salt, a pinch of cinnamon, extra virgin olive oil, grated orange zest and syrup to the sourdough maple. Knead vigorously until the mixture is smooth and elastic, not sticky. To adjust the consistency, add a little more water or flour if needed.

3) For leavening cover the bowl with a slightly moistened cotton cloth and let it rest until the dough has doubled in volume. Prefer a long leavening. For example, prepare the dough in the evening to bake the brioches in the morning.

4) Lightly flour the work surface and roll out the dough with a rolling pin forming a large rectangle with a thickness of about 3 millimeters. Divide with the pastry cutter into four long and narrow rectangles. Divide each rectangle into two triangles by drawing the diagonal. You will have thus obtained 8 triangles.

5) To fill the brioche, at the base of each triangle place the filling, choosing from a teaspoon of fruit jam, a teaspoon of dark chocolate chips (or half a square detached from a chocolate bar), a teaspoon of hazelnut cream or other filling of your choice choice. If you want, depending on the filling chosen, also add cinnamon, cocoa or vanilla powder.

6) Shape the brioches. Roll the triangles from the base to the tip to form "croissants". Close the corners tightly and fold them slightly inwards. If necessary, slightly moisten the edges of the dough to make them adhere better.

7) Arrange the brioches on a baking tray covered with parchment paper, well spaced from each other. The advice is to let them rest for another half hour before putting them in the oven. Bake your brioches with the sourdough ventilate in the oven and preheated to 180 ° C for about 15 minutes, until golden brown.

8) For those who do not have sourdough or for when you have little time available, you can use a cube of fresh brewer's yeast or a sachet of powdered brewer's yeast (7 grams) instead for a dough to be prepared with 500 grams of flour. In this case the rising times will be reduced compared to the sourdough. However, always wait for the doubling of the volume of the dough before starting to prepare the brioches. 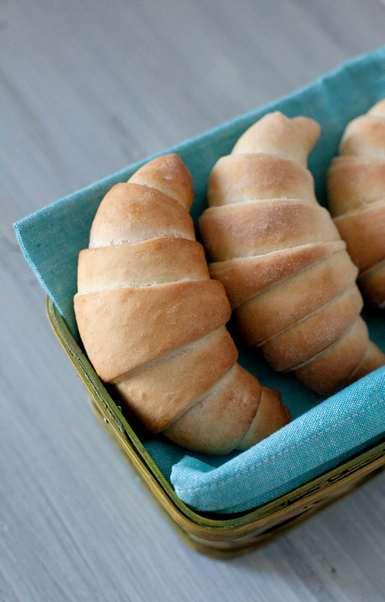