Wandering here and there between books and the web I found the detailed explanation of each type of process possible for make apple cider yourself at home and cheaply… So after the sauerkraut, the sourdough, the vegetable milk, the yogurt, he tofu and the seitan why not try the cider!?


After being passionate about its history, given that the origins of this drink are very ancient - it was in fact known in Normandy since the Middle Ages - I could not help but experiment with its homemade preparation.

Drinking cider, in the culture of the countries of Celtic tradition was and still is today a collective rite and a sign of union among the people: in the areas where cider apples are grown, such as in Sussex, on January XNUMXst and for many days in a row, meli: the farmers give some money to the children who dance around the trees singing rhymes at the top of their voices in which they express the wish for an abundant harvest.

Cristina Coleschi lecturer in chemistry and agri-food technologies at the Agricultural Technical Institute of Florence describes cider as a slightly acidic and sparkling drink with a modest alcohol content and very versatile as if served cold, it can become an aperitif and a dessert "sparkling wine" while if consumed in “brulé” version, heated with sliced ​​orange, cloves and cinnamon sticks it is aromatic and very sweet; on n ° 11 of rivistadiagraria.org suggests to prepare it starting from products easily available at home or at the supermarket ... which ones? 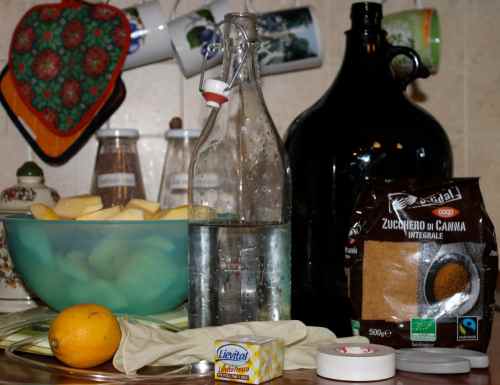 Enough blend the apples cleaned from the stalks and from the seeds with about 1/4 liter of water and 250 g of sugar then add the lemon juice and the yeast previously dissolved in a little warm water and then with a funnel insert the fruit puree in the flask capping it with a filling cap (in practice a cap that allows the release of carbon dioxide while preventing the entry of oxygenp)… a inverted funnel is suggested as an excellent substitute, but I relied on the excellent ingenuity of noi-e-la-luna.com and, as suggested, I punctured the cap of the flask, inserted a plastic straw soft then sealed with insulating tape and slipped the other side of the straw into a glass of water ... I therefore kept the flask in an environment with a temperature of about 20 ° C (in order not to slow down the metabolism of yeasts and not to block fermentation ). 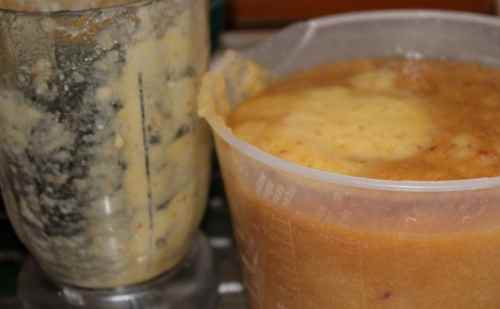 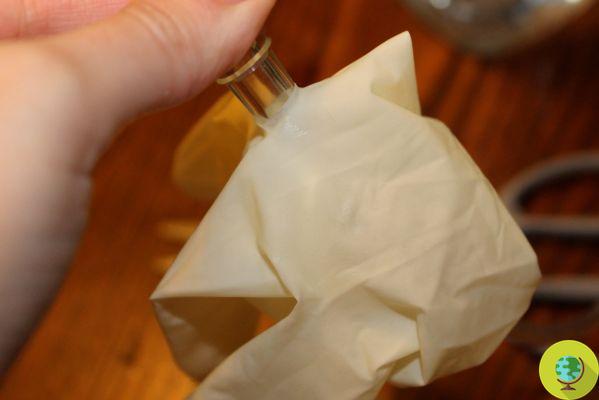 The solid part of the puree will tend to rise during fermentation pushed by carbon dioxide so once a day just shake the flask, thus stirring its contents; after two weeks the cider is ready just filter it and bottle it. 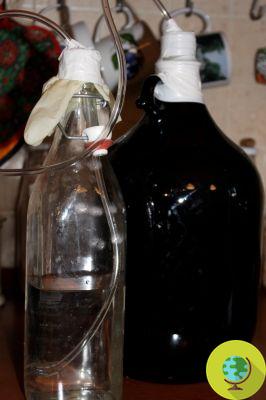 For a particularly sparkling cider, basically as I like it, it is suggested to add two full teaspoons of sugar to the bottles and close them with the capi keep the bottles in a cool place opening them about three weeks after bottling!

My cider is gently fermenting in my closet, in a month or so I will be able to tell you how it came in the meantime but I can recommend the excellent suggestion of http://www.fotolog.com/ilpentacolo/ di prepare your cider on a full moon, thus making it mature with the waning moon because the yeast that is dissolved is already very active and the influence of the moon must always go down so as not to give it a strong further energy ... good experimentation to those who decide to try their hand at this new self-production!

Here is the result: 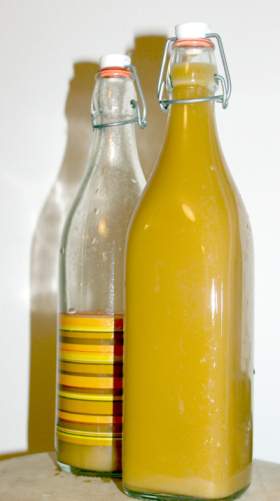 The symbolic meaning of food: what you eat reveals your emotions ❯