Pink Himalayan salt, is all that glitters really gold? There are those who consider this salt particularly rich in properties and benefits and those who criticize it calling it "a hoax".

Il pink Himalayan salt it is a natural product that has had great success in recent years and which has become all the rage especially among people who are more attentive to their health. But is all that glitters really gold? There are those who believe this Himalayan salt to be particularly rich in properties and benefits and those, on the other hand, criticize it, categorically calling it "a hoax".


Let's start with the alleged benefits of Himalayan salt. According to connoisseurs, Hymalaian salt would be very different from common table salt, which is essentially made up of sodium chloride. The pink salt, on the other hand, would be pure, very ancient, free of toxins and pollutants that can contaminate the types of salt that come from seas and oceans.

Pink salt in the Himalayas is also known as "white gold". It would in fact be a precious resource. It is very rich in mineral salts, which are completely absent in table salt. It contains more than 80, among which we find above all iron. The characteristic pink color would be due both to the high presence of this mineral and to the fact that this special variety of salt is not subjected to any whitening treatment.

Pink salt is not refined, it is not treated with any chemical process and it is uncontaminated: when it is extracted it is pure just like when it was deposited in the soil thousands of years earlier.

What are the purported health benefits?

First of all, the use of Himalayan pink salt, instead of the common table salt, would limit the risk of water retention and hypertension, since its sodium chloride content is significantly reduced. Furthermore, our intestines would absorb it less.

There would be then other benefits which may derive from the dietary use of Himalayan pink salt: 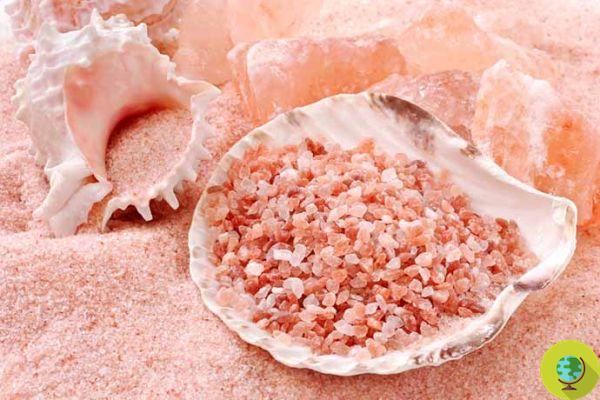 What are the uses?

The pink salt it is not just a condiment. There are indeed some interesting ones alternative uses of the pink Himalayan salt that go outside the food sector: the preparation of a scrub for the skin, its use for a hot bath and for the reduction of joint pain and the creation of a saline solution suitable for disinfecting the oral cavity in case of sore throat and cold. In this regard, read also: Pink Himalayan salt: health and energy in a crystal.

To discover how to best use Himalayan pink salt, follow i expert advice in this video:

There are also Himalayan salt lamps on the market, objects that are not only decorative but also useful for illuminating the house and, according to some theories, for removing some humidity from the rooms thanks to the action of the salt with which they are made. Last but not least, they are lamps capable of creating a soft and relaxing atmosphere, perfect for reconciling sleep.

Where to find Himalayan pink salt?

Pink Himalayan salt is now quite easily found in the supermarket, next to common table salt or spices. In addition, you can buy it in organic food stores, herbalists, in some fair trade shops and on the internet. You can find it for sale either coarse Himalayan pink salt and fine pink Himalayan salt. 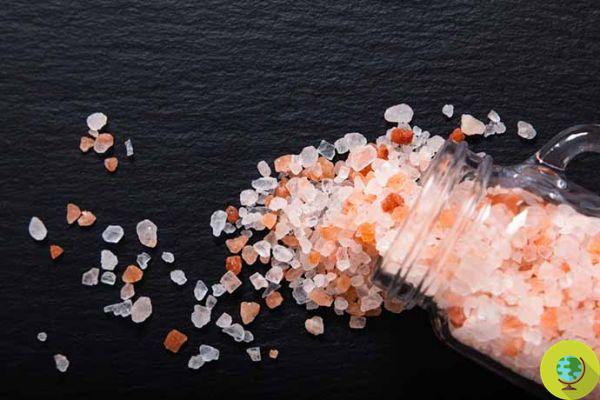 What are the drawbacks?

Unfortunately the pink salt of the Himalayas is not certainly a product at zero kilometers. The extraction areas are very far from us. These are in fact the natural salt mines found in Pakistan.

It is certainly good to evaluate the area of ​​origin of the food we buy, but it is also important to know that a normal pack of Himalayan pink salt lasts much longer than common table salt; it takes very little to give each dish that extra touch of taste.

However, some doubts remain regarding its extraction. The pink salt would be transported on the shoulders, in heavy bags, especially by women, for kilometers and kilometers, to the processing areas. The increased demand for the product would have helped to make working conditions even more harsh. It is also feared that its reckless extraction could destroy a real natural heritage. Not to mention the pollution associated with its transport from the East to the West.

Is pink Himalayan salt a hoax?

Several experts in the last period have intervened defining this so fashionable product simply a hoax. Among them is the known chemist Dario Bressanini who writes in his blog that there is no evidence that this salt has particular properties and that even if some doctors and nutritionists extol its alleged properties, these have never been confirmed by scientific research. Indeed, it is exactly the opposite: scientific articles show how Himalayan salt is substantially identical to cooking salt with the additional disadvantages, the presence of Cadmium and Nickel.

Bressanini also reminds us that in 2003 the Bavarian Office for Health and Food Safety analyzed 15 samples of this salt, concluding that there is no trace of the 84 elements that lovers of this product boast so much to promote its healthiness compared to the most common kitchen salt.

Recently the nutritionist and researcher of Crea also intervened on the subject, Andrea Ghiselli, defining this salt as "a social phenomenon but without beneficial properties". According to the expert, pink salt does not have any beneficial properties, it is impure and costs twice as much as sea salt.

"This salt owes its color to impurities of some minerals such as iron, zinc, magnesium and calcium and above all to iron oxide substances that are not present in such quantities as to bring any benefit". 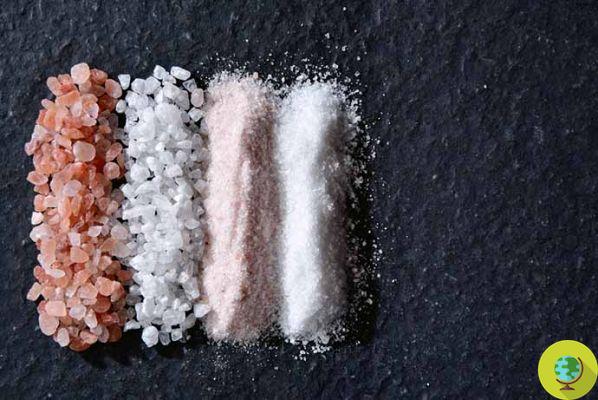 Another problem that pink salt presents is theabsence of iodine (instead it is mistakenly inserted among the trace elements that this salt should contain). We know that the right amount of this substance helps our metabolism and the proper functioning of the thyroid (which is why it is often added to traditional salt).

Other known and publicized aspects of the pink salt trade would also be completely misleading. According to the US magazine The Altantic, it is not harvested by hand as is often written on the packaging, but with special machinery.

What is even more serious it would not be extracted from the Himalayas, from which it takes its name, but from the Kewhra mine, in the “Salt range” in Pakistan, 300 km further south of the highest mountain range in the world. And among other things, the sustainability of this product is also contested.

The increase in the demand for pink salt all over the world, in fact, has done nothing but worsen the conditions of those who work in the mines. In addition to the too many hours of work (among other things often not in order) and the really too low wages, there is also the fact that the miners risk their lives (in 2011 a collapse caused the death of 7 people and another 4 are died in 2014).

In short, is it really worth buying this salt? What do you think?

add a comment of Himalayan salt: the whole truth about Himalayan pink salt