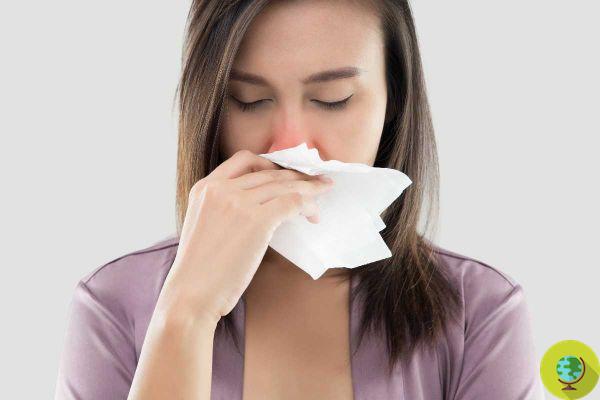 Hypertension is often an asymptomatic condition, but there is a mark in the nose that should not be underestimated because it is a symptom of high blood pressure.

Hypertension is often an asymptomatic condition, but there is a mark in the nose that should not be underestimated because it is a symptom of high blood pressure.


Symptoms of the high pressure they can be difficult to spot; in fact, most people often do not have any signs of hypertension. But there is a telltale sign right in the nose, which could be a a sign of hypertension not to be underestimated.

Hypertension - what it is

Hypertension is a fairly common condition that can affect people of all ages and genders. But, often, it can happen to not be able to understand that you have this problem because it is asymptomatic and it rarely has telltale signs.

Having high blood pressure means that i blood vessels and vital organs are under pressure more than normal. It is absolutely vital, if you suffer from this condition, to monitor your blood pressure as much as possible.

Patients with this pathology are more a risk of developing some complications, such as heart attacks and strokes, even if you often live with hypertension without even knowing it, as the symptoms are very difficult to spot. (Read also: Salt: the 6 unsuspected foods to avoid with high blood pressure)

One of the symptoms hypertension is to have epistaxis persistent. The bleeding in these cases is likely to come from the depth of the nose, and not near the nostrils.

Obviously, having a nosebleed does not necessarily mean suffering from hypertension; in fact, these bleeding episodes are usually a sign of nothing serious and are particularly common in children.

Le nosebleeds requiring medical attention they affect adults and can be caused by injuries, a broken nose, high blood pressure, conditions that affect blood vessels or blood clotting, but also some medicines. While nosebleeds are usually not something to worry about, it is advisable to speak to your doctor, especially if they occur on a regular basis, if you suffer from anemia or if you are taking blood thinning medications.

In some situations, however, it is advisable to go directly to the hospital, for example if the bleeding lasts more than 10 minutes, if the bleeding seems excessive or if you feel faint or dizzy.

Others symptoms common hypertension include:

Hypertension is also often known as "the silent killer" because it is not always easy to know if you are at risk, but anyone over 40 should have their blood pressure checked at their doctor's at least once every five years. family or even in the pharmacy.

High Blood Pressure: This well-known hypertension drug recalled. If you hire him check the lot ❯