Hidden soy in feed: we consume 57 kg of it every year, what if it was GMO? (#hiddensoy) 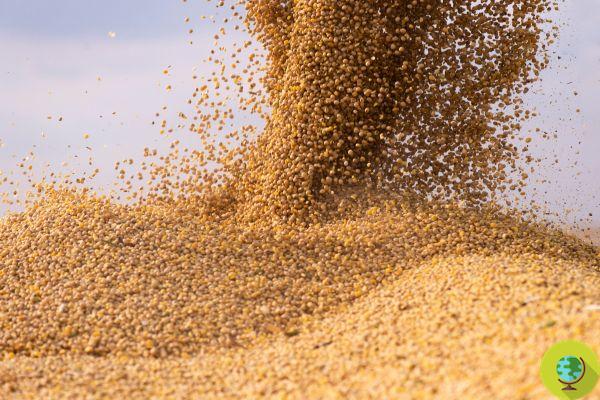 You have never tasted tofu, you are not vegan or vegetarian and perhaps you are convinced that soy is not present in your diet. Not so: those who eat meat, fish, eggs and cheeses are actually also taking soy. What if it was GM soy?

You have never tasted tofu, you are not vegan or vegetarian and perhaps you are convinced that it is soy is not present in your diet. This is not the case: those who eat meat, fish, eggs and cheeses are most likely also taking soy. What if it were GM soy? Furthermore, hidden soy threatens forests.

Soy by itself is a common legume. The problem is with the Intensive cultivation of soybeans in the world, with particular reference to GM soybeans, and its use for the production of feed for farm animals, from cattle to poultry to fish, unbeknownst to consumers.

Those who consume soy by choice (e.g. by purchasing tofu and soy milk) should prefer Organic products or in any case guaranteed as GMO-free. But how should those who take potentially GM soy or soy linked to the destruction of the environment orient themselves, without knowing it?

Consumers who they consume soy without their knowledge through products of animal origin they would not be protected from the possible presence, even minimal, of GMOs. According to the latest available data, a European citizen consumes an average of 61 kg of soy every year, of which 93%, ie 57 kg, is hidden in meat, fish and animal derivatives.

This is revealed by a new research report commissioned by the WWF, which launched ainteractive infographic thanks to which every citizen can find out how much soy he consumes per day. Most of the soy grown in the world - obviously excluding soy grown according to organic farming - is GMO and this type of soy is used for the production of feed for farm animals rather than for the production of food or drinks for human nutrition.

This is the issue that should be of particular concern those who consume products of animal origin from from intensive farming where soy-based feed is used. GM soy is grown in South Africa, Brazil, Uruguay, Paraguay, Argentina, Chile, Bolivia, Costa Rica, Mexico, the United States and Canada (see Thu the map of GMO cultivation in the world).

La soybean cultivation in the world it is occupying more and more agricultural land year after year. This industrially grown soybean is mostly channeled into the production of feed for farm animals. That is how thousands of hectares of land are intensively exploited to produce feed for animals, when instead they could be used to grow legumes, vegetables and cereals to be used directly for human consumption.

"Most European consumers have no idea how much soy is contained in meat, in dairy products, eggs and farmed fish that he consumes every day "- explains Sandra Mulder, head of the WWF soy working group - "Even less is the awareness of how much 'hidden' soy has had a devastating impact on some of the most precious ecosystems of the world, such as the Amazon, the Cerrado and the Gran Chaco ”.

The WWF therefore asks the European companies who buy soy or products derived from animals raised on soy of source only responsibly grown soybeans or non-GM soybeans. Soybean cultivation, especially in South America, occurs at the expense of agricultural land, the environment and local worker communities.

Through the WWF platform European consumers can act directly and contact their favorite supermarkets, fast food restaurants and companies to ask them to source only "responsible" soy produced according to the standards of the Round Table for Responsible Soy, or non-GM soy.

You would have ever thought that an omnivore might consume much more soy than a vegetarian or vegan? And that this soy could be GMO?

Discover Thu how much “hidden” soy you consume each day (#hiddensoy).

We will suffer from nutritional deficiencies due to CO2. The Harvard study ❯

add a comment of Hidden soy in feed: we consume 57 kg of it every year, what if it was GMO? (#hiddensoy)