Hemorrhoids: foods to prefer and foods to avoid 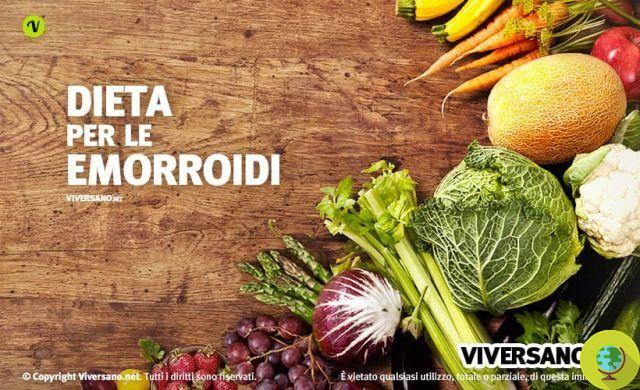 Le hemorrhoids show up with a dilation of the veins in the final part of the rectum. They can be internal or visible on the outside. They can become quite a nuisance, but preferring certain foods and trying to avoid certain foods can help.

Here are the foods to prefer and foods not recommended in case of hemorrhoids. However, it is simply about general indications. Dietary advice in case of hemorrhoids can vary from person to person and based on the pathologies present and the diet usually followed. So our suggestion is to consult your doctor or nutritionist trust to find out more.

Le apples, and the fresh fruit in general, belong to the foods recommended in case of hemorrhoids. For their wealth of fibers apples are among the foods that help maintain regular intestinal functions. However, hemorrhoids could also be linked to other intestinal or digestive problems for which an excess of fiber in the diet is contraindicated. For this reason, it is good to better understand the correct intake of fruit and fiber in one's diet in case of hemorrhoids consult your doctor.

Read also: Apples: all the benefits and how to best use them

I blueberries, and in particular the blueberry juice and the juice of dark berries, such as blackberries, come Recommended in case of hemorrhoids with the suggestion to mix them with del Apple juice. In addition to blueberries, the recommendations are for blackberries and cherries. The benefits relate to their content of anthocyanins, which help reduce the swelling of hemorrhoids, tone and strengthen the veins. At least 1 glass of cranberry juice or other dark fruit rich in antioxidants should be drunk a day in case of hemorrhoids.

Read also: The 11 berries of health

I red and black currants are considered berries useful in case of hemorrhoids, as they are rich in vitamin C, mineral salts and rutin. When hemorrhoids are accompanied by painful manifestations, currant can help because it can help relieve discomfort by promoting the production of prostaglandins.

Among the foods recommended in case of hemorrhoids we find the chestnuts, which can become part of a list of foods to compose a real one diet for hemorrhoids. A curiosity: the remedies of the popular tradition suggested to keep two chestnuts (horse chestnut) in the pockets to keep away from hemorrhoids. The same superstitious suggestion also applied to keep seasonal ailments at bay.

Il melosine it is one of the most recommended foods in case of hemorrhoids, especially for its richness of iron. Eating iron-rich foods when suffering from hemorrhoids is helpful as this element can be lost due to bleeding caused by hemorrhoids. Other foods useful for the richness of iron could be represented by red beets.

FOODS AND DRINKS TO AVOID

Between food and drink that it would be better to avoid in case of hemorrhoids are foods that are high in fat or that are likely to inflame and irritate the colon. To example should be avoided sodas, aged cheeses, spirits, spirits such as whiskey and vodka, crustaceans, coffee, chocolate, too salty, fried and sautéed foods. Chilli should be used in moderation, as its role in hemorrhoids is currently controversial. Truffles and pickles are also not recommended.

READ ALSO: 10 Foods That Can Cause Inflammation

add a comment of Hemorrhoids: foods to prefer and foods to avoid