Heart attack: less risk if you take the sauna regularly 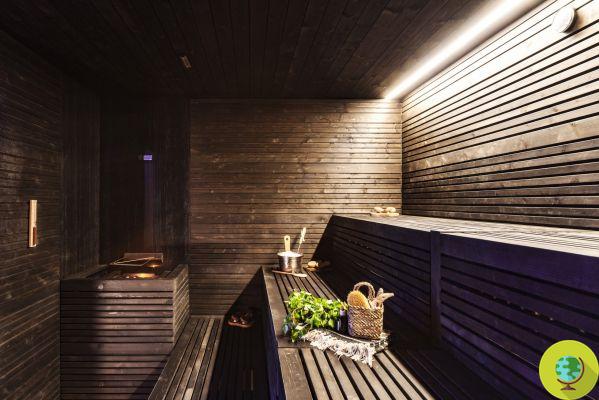 To safeguard our heart and avoid the risk of a heart attack, it might be useful to take a sauna regularly

Lower risk of heart attack with the sauna. Not only more fruit every day to save our heart, but also steam baths to avert cardiovascular diseases.

Un natural remedy which, among other things, helps to expel toxins from the body and thus facilitate purification. So, double the result!

Supporting the role of the sauna in safeguarding the state of our little heart is a group of (coincidentally) Finnish researchers from the University of Eastern Finland of Kuopio, according to which this practice, lasting at least 20 minutes per session, should be associated with a death rate from cardiovascular diseases that is about half lower.

The experiment - what study involved 2.315 men aged between 41 and 60 living in the eastern part of Finland, where there is a tradition of going to the sauna regularly. During the 21 years of analysis, 190 deaths from sudden cardiac arrest, 281 from coronary heart disease and 407 from cardiovascular disease were recorded. In total, 929 premature deaths occurred, linked to both heart or vascular disease and other causes.

According to the data obtained, attending a sauna two or three times a week reduces the risk of mortality from heart attack and other heart disease up to 22%, while between four and seven the risk would be reduced by 66%. Similar percentages are those found for coronary heart diseases, with percentages respectively of 23% (2-3 times a week) and 48% (from 4 to 7). We pass to 27% and a halved risk for cardiovascular diseases, while for general mortality the risk is reduced by 24% and 40%.

Also, the men who performed saunas of at least 20 minutes they had a 52% reduction in mortality risk compared to those who stayed less than 11 minutes. But what is the mechanism that really starts in a cycle of baths?

This is an aspect that has yet to be clarified and further studies will be needed, say researchers, to establish the mechanism by which potential is expressed link between sauna and cardiovascular health.

In the meantime, let's indulge in a few sauna sessions, but remember that if you suffer from blood pressure too low, are pregnant or have cardio-circulatory or respiratory problems, it is not recommended!

Sauna: 6 rules to get the maximum benefits

Heart attack: to know if you are at risk, a blood test will suffice ❯

add a comment of Heart attack: less risk if you take the sauna regularly