Health in a cup of coffee: 3 pros and 3 cons 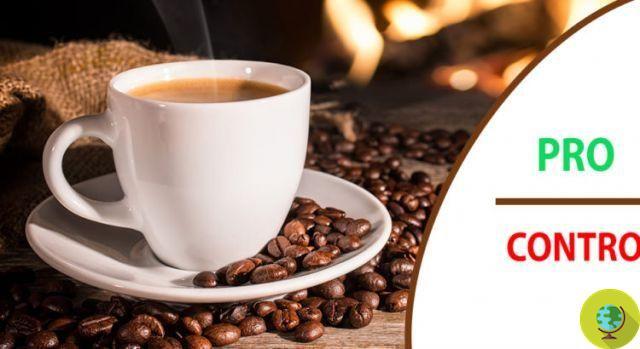 Whether it is black and hot or warmed and "lightened" with milk, coffee, with its dense scent and its unmistakable aroma, accompanies and marks our days, from breakfast, to business meetings, to lunch breaks, chat with friends and colleagues. A cup at the right time helps us to fuel better, to be more attentive and keeps us awake and alert to better face particularly boring or tiring commitments. More than a food habit, for many of us it is a real ritual.

Whether it is black and hot or warmed and "lightened" with milk, coffee, with its dense scent and its unmistakable aroma, accompanies and marks our days, from breakfast, to business meetings, to lunch breaks, to chats with friends and colleagues. A cup at the right time helps us to fuel better, to be more attentive and keeps us awake and alert to better face particularly boring or tiring commitments. More than a food habit, for many of us it is a real ritual.

Among the most popular and loved drinks in the world, coffee is an infusion obtained from roasted seeds and ground of some species of tropical trees and shrubs, belonging to the genus Coffea. Chemically, it is a mixture of carbohydrates, lipids, fundamental amino acids, Vitamins, alkaloids (in particular, caffeine) is phenolic compounds. The caffeine is an antagonist ofadenosine, inhibitor of the central nervous system, and has an effect stimulating on the organism: 50 ml of espresso coffee, which corresponds approximately to a cup, contains an amount that varies from 50 mg (in the case of a restricted bar coffee) ai 80 mg (in the case of a coffee prepared with the home mocha).

For its exciting characteristics, coffee generally comes not recommended for those who suffer from particular pathologies, for example in the case of cardiovascular disorders and hypertension, but in most cases it is not considered "dangerous" for health: rather, doctors and experts seem to invite a moderate consumption, which does not exceed a certain daily threshold.

So let's see some in detail pros and cons of coffee consumption, without claiming to be exhaustive and remembering that, in the presence of ailments, illnesses or particular psycho-physical situations and conditions (such as pregnancy or breastfeeding), it is good practice to consult a doctor.

Coffee reduces the risk of diabetes

An American study conducted in 2005 suggests that drinking coffee in rather large quantities contributes to decreasing the risk of onset of diabetes mellitus (also called 2 type diabetes): the assumption of at least 6 cups a day it would decrease the risk of 2 type diabetes particularly significantly, with percentages reaching 54% for men and 29% for women. However, we must not forget that the abuse of coffee, like most foods and drinks, can involve risks for the body. For this reason, excessive consumption could also be useful for the prevention of diabetes, but, at the same time, it could favor the onset or worsening of other disorders and pathologies: it is better not to risk, therefore, and drink coffee in moderation.

Coffee beans contain substances antioxidants useful to prevent different types of diseases and ailments and capable of defend the body's cells from the action of free radicals. Among these substances we find, for example, thechlorogenic acid, which has a very powerful antioxidant action (partly diminished - alas - by digestive processes): 50 ml of coffee can contain an amount ranging from 18 to 90 mg.

Some scientific experiments record that, when confronted with a learning test, volunteers who have coffee in the morning offer best performance than those who don't drink it. Being a stimulant, in fact, coffee can help keep attention (This explains the beneficial effects of the cup that we allow ourselves after lunch, to face the afternoon work hours) and, as we get older, it contributes to keep our cognitive faculties in training. So much so that scholars hypothesize that caffeine may have some positive effects in the prevention of Alzheimer's.

Coffee can contribute to the worsening of osteoporosis

Taking coffee in high doses, above 2 cups a day, can cause one reduction in absorption of football by the body and an increase the risk of fractures, particularly in women after menopause. It would therefore be a good idea, after a certain age, to prevent the risk of non-absorption of calcium by never drinking more than 2 cups of coffee per day and, possibly, staining it with some XNUMX cups milk.

Despite the presence of antioxidant phenolic compounds, drinking too much coffee can contribute to the appearance of the much hated and feared wrinkles. For this reason, it is advisable to take it in moderation and prevent this very unpleasant "side effect" by taking care of maintain the skin hydrated, drinking a lot water and following a diet rich in vegetable, fruits and vegetables.

Coffee commonly found on the market may contain pesticides

The cultivation of coffee plants is often marked by themassive use of chemicals e pesticides: all substances that we would prefer not to ingest and not to circulate in our body. To avoid this risk, it is preferable to choose del organic coffee, perhaps coming from fair trade. If you usually consume del decaffeinated, then, you have to make sure that in the caffeine removal process, which takes place before the roasting of the beans, are used exclusively natural solvents and not chemicals.

The sauna protects the brain from dementia ❯

add a comment of Health in a cup of coffee: 3 pros and 3 cons