He graduates and asks for a piece of land as a gift: 'spices and aromatic plants are my future'

Who I am
Elia Tabuenca García
@eliatabuencagarcia
He is about to end up run over, his mother saves him

Roberto Carbone on the occasion of his graduation asked his parents for a very special gift: a piece of land to cultivate to build their own future.


24 years old from Catania, Roberto completed his three-year course in Food Science and Technology and dreams of becoming an agricultural entrepreneur. For this reason, instead of other expensive gifts on the occasion of graduation, he preferred to have land that he could use to start working immediately and that his parents promptly bought in Trecastagni.

The young man started a cultivation of aromatic plants and spices following the passion for the land of his grandfather who had a plot in Nicolosi and cultivated vines to make wine. A conscientious young man, Roberto knew that dedicating himself to wine production was too much for him:

"Making wine would have been too demanding from an economic point of view - and so, keeping my feet on the ground, I decided to cultivate and transform Mediterranean aromatic plants"

Thus was born his “Sari” company located inside the Etna Park at a height between 650 and 700 meters. Here in the month of May the aromatic plants are processed and packed in a small laboratory. Everything is done by hand, especially by Roberto's mother, Marisa, who helps her on the farm every time she doesn't have to give Latin and Greek lessons.

In Roberto's land it is possible to find rosemary, oregano, chillies, lavender, helichrysum and saffron, these are transformed into aromas for the kitchen but also used for make special jams and marmalades such as the one based on "cola apples", typical variety of Etna which is combined with rosemary. But there are also those of thigh pears and lavender flowers and peppers and chilli. 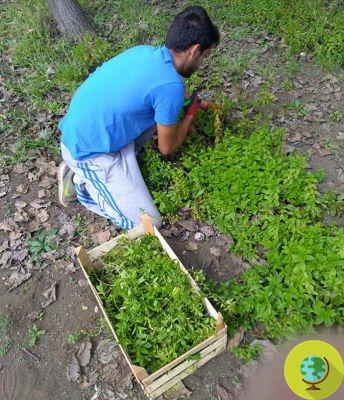 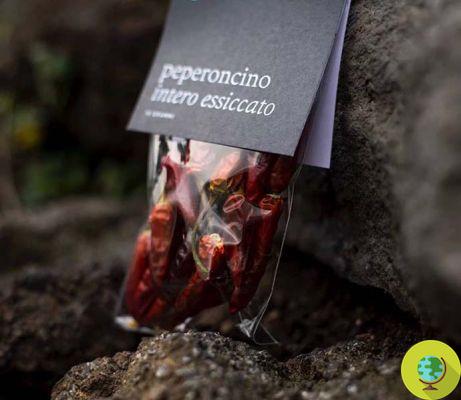 Marisa is very proud of her son's courageous and out-of-trend choice:

"His choice is that we particularly appreciated, not only because we believe that he has entrepreneurial skills, but because the love for nature, care, study, dedication to a land to be protected are all objectives that young people before and better than us, they put themselves in front. They will be the ones to pay for a policy that has torn and continues to tear up the territory, a resource that is not infinite. Guys who also make the choice to stay here to invest in the area, for me they are heroes ".

Roberto dreams big and his goal is now to make his products known abroad where, the young man is convinced, they will be even more appreciated. He will thus be able to become economically stable and build a family in the place where he was born that he loves and protects to the point of wanting to return expatriate friends elsewhere to live there permanently:

“There is a guy I'm trying to bring back to Catania, he works at FAO and speaks four languages. I want to bring him here to let him enjoy the silence of this place. Some mornings you can only hear the bees buzzing, a sound that is priceless "

We hope that Roberto will be able to involve other young people and make them reflect on the fact that betting on themselves and on their land can bear fruit.

Can you really live without bills? Alessandro Ronca's challenge in the Renewable Energy Park ❯

It looks like an art show, but these "dancing lights" reduce pesticide use by 50%

Chlorpyrifos: the US court orders to ban pesticides that damage development in children

add a comment of He graduates and asks for a piece of land as a gift: 'spices and aromatic plants are my future'