Hashimoto's thyroid: symptoms and how to recognize it 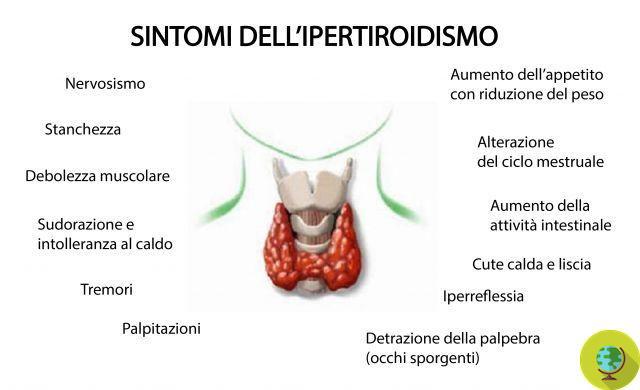 What is Hashimoto's thyroiditis, how is it recognized and what symptoms it causes.

Also known as lymphocytic thyroiditis or "welfare disease", it's a autoimmune thyroid disease linked to hypothyroidism. It is caused by the antibodies of our own organism, which are produced in excessive quantities and attack the thyroid tissue, to the point of causing its destruction. Hence thehypothyroidism, which is caused by the fact that the thyroid no longer works as it did before and gradually reduces its activity.

It is a disease mostly widespread among women and generally has a family origin. Furthermore, it is much more extensive in areas with a moderate amount of iodine, while it is rarely found in areas with iodine deficiency.

THE SYMPTOMS OF HASHIMOTO'S THYROIDITIS

Ma how it manifests itself Hashimoto's thyroiditis, how is it recognized and what are the causes? First, it is good to know that this disease tends to remain asymptomatic for a long time, that is, as long as the production of thyroid hormones remains normal. Then, in general, The symptoms of Hashimoto's thyroiditis are similar to those of hypothyroidism, in turn caused by an insufficient production of the hormones T3 and T4: we therefore speak of tachycardia, drowsiness, asthenia, insomnia, enlargement and soreness of the thyroid.

Furthermore, a whole series of vital functions depend on the hormones T3 and T4, such as the basal metabolism and, even if in part, theovarian activity in women and libido, while other symptoms are:

HOW IS HASHIMOTO'S THYROIDITIS RECOGNIZED

Symptoms can differ from person to person, so to get a correct diagnosis it is always good to contact an endocrinologist who will evaluate many factors on a case-by-case basis, including the individual's family and medical history. In any case, the first sign that may be evident is the goiter: palpating, it is possible to find an enlargement of the gland. After palpation, they must be done specific blood tests, to check the values ​​of TSH (hormone produced by the pituitary that regulates thyroid activity), FT4 and FT3 (the free fractions of thyroid hormones in the bloodstream), and antibodies (AC) to thyroid peroxidase (thyroid enzyme) , and antibodies to thyroglobulin (another value that is almost always altered). To all this we can add the TSH antireceptor AC test and theechography. Then the doctor will prescribe other tests if necessary.

To this day still the triggering reasons are unknown of Hashimoto's thyroiditis, although it is practically certain that a fundamental role is played by familiarity, pregnancy and menopause.
However, there is talk of one cause of an autoimmune nature: T lymphocytes, white blood cells that are part of our defense system against pathogens, infiltrate the thyroid and attack it, making it impossible to function. This gland is then destroyed and the symptoms worsen.

Thyroid: foods and tips to awaken it

Hashimoto's thyroiditis: what to eat to help the thyroid ❯

add a comment of Hashimoto's thyroid: symptoms and how to recognize it