Gums that bleed: causes and remedies that really work to prevent them

Why do the gums bleed? And what to do to prevent or reduce discomfort? Gums that bleed, a disorder that is frequently encountered and which is especially noticeable when brushing the teeth. But what can be the causes and natural remedies to prevent or deal with the problem?

Why do the gums bleed? And what to do to prevent or reduce discomfort?

Gums that bleed, a disorder that is frequently encountered and which is especially noticeable at the time of brushing the teeth. But what can be the causes and natural remedies to prevent or deal with the problem?

Le bleeding gums are caused, in most cases, by plaque deposited around the teeth, inside this substance there are germs that attack healthy tissue and create inflammation and irritation, a state known as gingivitis.

Gingivitis is generally a painless condition, and bleeding gums may be the only symptom present. Plaque that has not been removed carries the risk of the gums retracting and moving away from the teeth in the long run. The retraction causes pockets to form between the teeth where germs can proliferate, making the situation even worse and, in severe cases, leading to tooth loss. In cases like these, the gingivitis has progressed to a more serious condition known as periodontitis.

Bleeding gums can actually indicate other health problems as well. You absolutely must not ignore the presence of blood leaking from the gums and contact a dentist immediately to understand the origin of the problem and intervene promptly.

Let's now discover the most frequent causes of gingival bleeding.

There may be occasional gingival bleeding, for example caused by brushing your teeth too vigorously, with a toothbrush with unsuitable bristles and without using dental floss (i.e. poor oral hygiene), or chronic bleeding whose causes can be identified in presence of:

The most frequent cause is certainly the gingivitis which develops when plaque stays on the gums for too long. If this is not properly removed, it can harden and become tartar which will increase bleeding. In this case you may also notice inflamed, swollen gums as well as pain in the mouth. As we have already said, neglected gingivitis can turn into periodontitis which in the long run can cause teeth to fall out.

La deficiency of vitamins C and K it can easily cause gum bleeding. But this is not common in developed countries where we eat abundantly on foods that contain these substances or take supplements.

People who have prosthesis they can suffer from bleeding gums especially if the braces are very tight.

La pregnancy is another common cause of gum bleeding. The hormonal changes that occur during this time can make the gums more sensitive.

The gums may also bleed from taking certain blood-thinning medications including warfarin, aspirin, and heparin.

More rarely, bleeding disorders such as haemophilia and leukemia or a low number of platelets (thrombocytopenia) are at the root of the problem, which can increase the risk of gum bleeding.

Another risk factor is smoking. The toxins that are produced are in fact deposited on the teeth causing irritation. Finally, the stress that lowers the immune defenses can also negatively affect the health of our gums and teeth which will be more prey to bacteria and germs.

The key to preventing bleeding gums is to take care of your own daily and to the best of your ability oral hygiene using a soft-bristled toothbrush (gentler on inflamed gums) to brush your teeth after each meal followed by dental floss. It is also important to contact a dentist for a teeth cleaning every six months or according to the needs of your oral cavity. 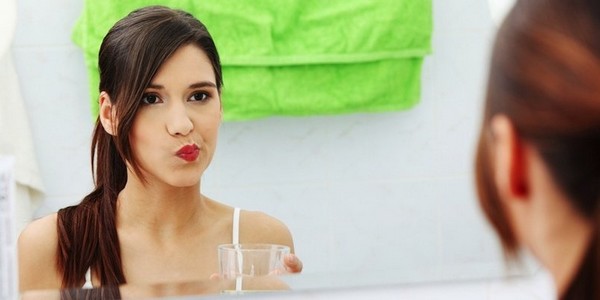 Natural remedies that can be tried to stem the problem of bleeding gums are then:

Bleeding from the gums can be soothed several times a day by rinsing with warm salt water, a useful system for disinfecting and relieving inflammation. You can therefore add half a teaspoon of salt to a glass of warm water and rinse your mouth for a few seconds, three or four times a day.

Eating foods rich in vitamin C can strengthen the immune system and help fight gum infections that cause bleeding. Green light therefore to a greater consumption of oranges, kiwis, carrots, red peppers and all other foods rich in vitamin C. Taking a vitamin K supplement, which helps blood clot, can also alleviate the problem of the gums bleeding. However, it must be agreed with your doctor by assessing the general state of health. In the meantime, you can increase your consumption of foods that contain this vitamin such as spinach, kale and mustard.

Drinking green tea daily can help with periodontitis and bleeding gums. This drink contains catechin, a natural antioxidant that can reduce the body's inflammatory response to bacteria in the mouth. A study in a sample of 940 men analyzed the effectiveness of green tea on improving gum health by examining the depth of the participants' periodontal pocket before and after drinking green tea, as well as any loss of gum tissue and the incidence of gum tissue. bleeding. Based on the findings, the researchers concluded that the more green tea you drink, the better your periodontal health. It is therefore recommended to drink 3 or 4 cups of this tea every day.

Coconut oil, with its natural healing properties, is a good option for treating bleeding gums. The anti-inflammatory nature of this remedy can reduce gum irritation, while its antimicrobial properties can help fight plaque. One tablespoon of melt-in-the-mouth coconut oil can be used to rinse for 10-15 minutes once a day. To practice the so-called oil pulling you can also use sesame oil. 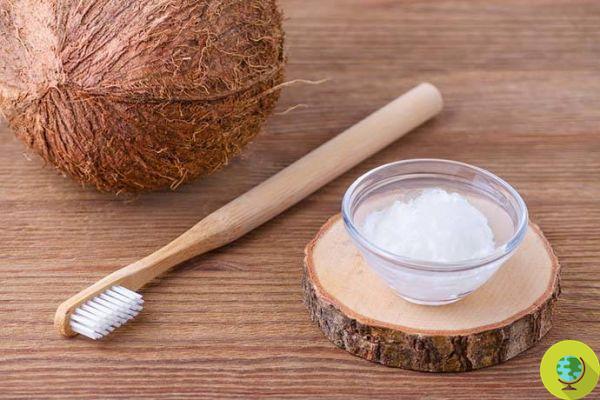 2 drops of clove oil can be added to the spoonful of coconut oil. The content in phenolic compounds such as eugenol gives this natural remedy anti-inflammatory and antibacterial properties. In addition, cloves are also a natural pain reliever. All very useful features in the treatment of bleeding gums and gingivitis.

To soothe inflamed and bleeding gums you can also use 100% pure aloe vera gel to be applied directly to the areas affected by the problem with a light massage. Leave on for about half an hour before rinsing.

A valid advice also to ensure that your gums stop bleeding. Smoking is in fact a leading cause of severe gum disease in the United States, as the Centers for Disease Control and Prevention states. Smoking can lower the immune system and therefore make it harder for the body to fight off plaque-forming bacteria.

There are studies linking periodontal disease to emotional distress. Stress would have a negative impact on the immune system. This can cause the body's defenses to weaken to the point where it can no longer fight gum infections properly. So do breathing exercises, meditate, play sports, allow yourself some free time to relax and slow down the pace of your days.

If the gums are bleeding from trauma or an injury to the gum tissue, a cold pack can be applied to help reduce swelling by restricting blood flow. It should be kept on for 20 minutes several times a day.

add a comment of Gums that bleed: causes and remedies that really work to prevent them