Green tea really burns fat and counteracts obesity. But how much to take? 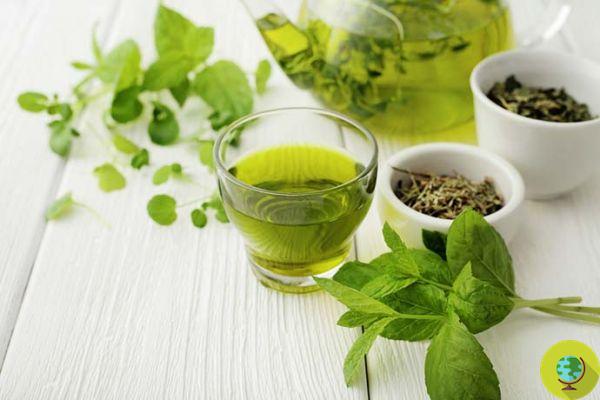 Green tea is a good and healthy drink. This has been repeatedly confirmed as well as its ability to help burn fat by promoting weight loss and counteracting obesity.

Il green tea it is a good and healthy drink. This has been repeatedly confirmed as well as its ability to help burn fat by promoting weight loss and counteracting obesity.


This time, this time on the properties of green tea was a research carried out at the State University of Ohio and which saw its publication in the Journal of Nutritional Biochemistry. The scientists wanted to verify in particular the potential of the active ingredients of green tea on intestinal health and consequently on their possible anti-obesity action.

To do this, unfortunately, they chose to conduct the study on an animal model. The mice were given a specific diet which was accompanied by the administration of a 2% green tea extract. Of course there was a control group in which the mice were fed exclusively with the diet which was not compensated for by the use of tea.

It was thus seen that the group of mice taking green tea extract had greater good bacterial flora and, more generally, better intestinal health which resulted in less permeability of the walls of this organ. Furthermore, the same group had 20% less weight and lower insulin resistance again than the control group.

As Richard Bruno, professor of human nutrition, lead researcher on the team that conducted the analysis, said:

"This study provides evidence that green tea encourages the growth of good gut bacteria and that it leads to a number of benefits that significantly reduce the risk of obesity."

But how many cups of green tea in the experiment corresponds to human consumption?

At 10, according to experts, a quantity that for us is definitely exaggerated, but which in some parts of the world where this drink is very popular does not differ too much from people's habits.

Professor Bruno is currently working on a human study that will explore the effects of green tea on leaky gut problems in people with metabolic syndrome, a condition that predisposes to type 2 diabetes and heart disease.

For now, he said, it is too early to say that the discoveries made on animals are certainly valid for people as well. He also recalled that while the benefits were also shown to be valid in humans, green tea supplements would not be an obvious substitute for drinking the drink throughout the day and this is because of how the body metabolizes the catechins in tea.

add a comment of Green tea really burns fat and counteracts obesity. But how much to take?