Gray hair can return to its original color, science says 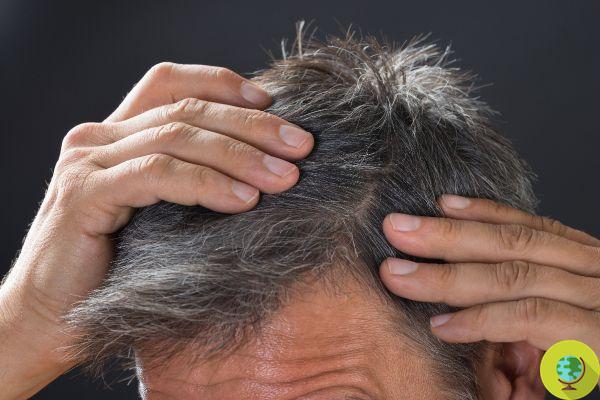 Gray hair can recede and return to its original color, but it all depends on the level of stress - science explains.

Gray hair can recede and return to its original color, but it all depends on the level of stress - science explains.


I grey hair they are one of the main characteristics of the fact that you are getting older. While this may seem like a permanent change, new research reveals that the graying process can be undone, at least temporarily.

According to some studies, gray hair may spontaneously regain its original color; in fact, similar cases have existed within the scientific literature. In a 1972 article, dermatologist Stanley Comaish reported an encounter with a 38-year-old man who had what he described as a "more unusual feature". Although the vast majority of the individual's hair was either all black or all white, three strands were light near the ends but dark near the roots. This signaled a reversal in the normal graying process, which usually starts right from the root.

In another study, a group of researchers pointed out how this phenomenon can occur in the hair of people of various ages, ethnicities and genders. Furthermore, it has been shown that graying is connected to periods of stress, which implies that the process linked to aging is closely associated with the psychological well-being of the individual. (Read also: Instead of covering gray hair, this hairdresser helps women accept it with powerful transformations)

Some researchers of the Columbia University, they verified how our cells begin to show signs of aging in different ways and at different times; this process was also visible on hair which does not all turn gray at the same time. Hair that turns white first is likely the most vulnerable or least resistant.

In this way, according to the researchers, it is possible to identify the period in which the hair began to age and, therefore, ask the question of what happened in the life of the person that triggered the change.

The researchers developed a technique for digitize and quantify subtle changes in hair color, along each lock. These patterns revealed something surprising: in 10 of these participants, aged between 9 and 39, some graying hair regained color.

The team also found that this occurred not only on the head but in other regions of the body as well, and added that since reversibility only appeared in certain hair follicles it is likely limited to specific periods when changes can still occur.

Most people start noticing their first gray hair in their 30s, although some may find it in their late 20s. This period, when graying has just begun, is probably the time when the process is most reversible. In those with a full head of gray hair, most of the strands have presumably reached a "point of no return," but the possibility remains that some hair follicles may still be malleable to change.

The team also investigated the association between thegraying of hair and psychological stress, because previous research has suggested that such factors can accelerate the hair aging process. Anecdotes of this connection are also visible throughout history: according to legend, the hair of Marie Antoinette, queen of France of the eighteenth century, turned white during the night shortly before her execution on the guillotine.

In a small subset of participants, the researchers identified segments in individual hair where color changes occurred in pigmentation patterns. Then, they calculated the timing of the change using the known average growth rate of human hair: about one centimeter per month. These participants also provided a history of the most stressful events they had experienced over the course of a year. (Read also: The speed at which we age may depend on this little mineral)

This analysis revealed that the times when graying or inversion occurred corresponded to periods of significant stress or relaxation. In one individual, a 35-year-old man with auburn hair, five strands of hair experienced a turnaround to graying during the same time frame, which coincided with a two-week vacation. Another subject, a 30-year-old woman with black hair, had a lock that contained a white segment that corresponded to two months during which she underwent marital separation and relocation, the most stressful time of the year.

The next step is to take a closer look at the link between stress and graying, which means monitoring participants for a set period of time rather than asking them to recall past life events.

Eventually, one might envision hair as a powerful tool for assessing the effects of life events on aging, because, just like tree rings, hair provides a kind of physical recording of past events; it is quite clear that hair encodes part of the biological history of the individual.

On hair could it be interesting for you:

Fermented grains may provide us with enough vitamin B12. I study. ❯

add a comment of Gray hair can return to its original color, science says