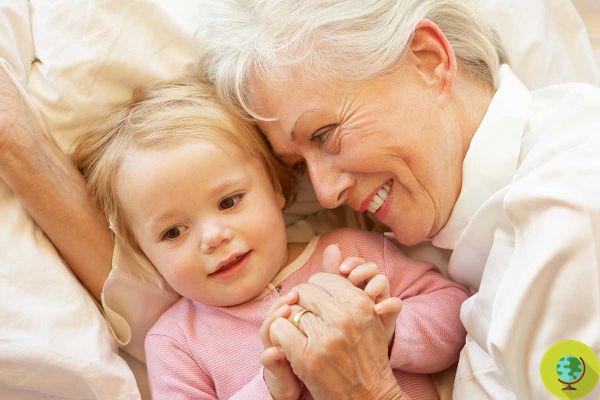 A study investigated what happens to grandmothers' brains when they see their beloved grandchildren, areas associated with empathy are activated

Grandmothers are known to love their grandchildren. For the first time, however, a study wanted to find out what happens to grandmothers' brains when they look at their beloved babies.


A unique research of its kind has investigated the effects on the brain of a vision that we could define as "celestial" for almost all grandmothers: that of their grandchildren. To investigate this aspect that links the brain and emotions so closely is a study conducted by a team from the Emory University of Atlanta (USA).

The researchers used the functional magnetic resonance to examine what happens in a grandmother's brain when she looks at photos of a grandchild, adult child, unrelated child, or unrelated adult.

About 50 grandmothers with at least one biological grandchild between the ages of 3 and 12 were recruited to participate in the study. And what the researchers found is that different areas of the brain are activated when grandmothers look at their grandson rather than the now adult child.

The results of the experiment showed that, when viewing the images of their grandchildren, most of the grandmothers showed more activity in the areas of the brain involved in empathy, compared to when they were looking at the other images.

They were the same grandmothers who, in a questionnaire administered by the authors to be associated with the resonances, had declared that they wanted to be more involved in the care of their grandson.

As Professor James Rilling, lead author of the study stated:

One limitation to the study, the researchers note, is that the participants were exclusively mentally and physically healthy women, aka "high-functioning grandmothers."

It would also be interesting to look at grandparents 'neuroscience and how grandparents' brain functions can differ between cultures, said Minwoo Lee, another researcher involved in the study.

The main challenge that many grandmothers pointed to in the questionnaire was to try not to interfere with parents when they disagreed about how their grandchildren should have grown up and what values ​​to convey to them.

Many of them also said how great it is not to be subjected to as much time and financial pressure as when they raised their own children. They manage to enjoy the experience of being grandmothers much more than they did as parents.