Gout is a metabolic and inflammatory disease that affects the joints especially in the feet, knees and wrists, creating swelling and pain. Very important to keep the situation at bay is to follow a suitable diet in which some foods are favored rather than others.

La gotta it is a metabolic and inflammatory disease that affects the joints especially of the feet, knees and wrists, creating swelling and pain. Very important to keep the situation at bay is to follow a suitable diet in which some foods are favored rather than others. So what to eat in case of gout?


What was once known as the disease of the rich (in fact, only those who ate a lot of meat contracted it) today it affects everyone without distinction even if the male sex is generally more interested especially from a certain age. One of the main causes of gout is adiet particularly rich in animal proteins, however, we must not forget that the disease can also have other causesee also has a genetic component independent of the type of diet one follows.

Gout is caused by an excess of uric acid in the blood which derives from the metabolism of some molecules called purine (particularly present in foods of animal origin) and which irritates the joints as it tends to form crystal deposits (called tophi) responsible for the swelling and deformations of the joints to which sufferers of this disease are often subject. A diet that is too rich in proteins, especially those that derive from red meat and fatty fish, but in which one also exceeds with refined cereals and alcohol is certainly among the most frequent causes of gout. It is therefore evident how important it is act on your daily diet both in the preventive phase and in the treatment of the disease, let's see what are the recommended foods and those not recommended in case of gout.

The gout diet includes a number of recommended foods others to be consumed in moderation and still others strongly discouraged. It is very important not only to eat the right foods but also be careful to maintain a healthy weight reducing the usual portions a little if you are overweight (in this case it is always better to rely on the advice of an expert). However, diets that are too drastic or prolonged fasting are not recommended.

Through a right diet it is possible lower blood uric acid levels. I recommended foods they are above all wholemeal ones and coming from the vegetable world, i.e. fruit, vegetables, oil seeds, etc. Some research has shown the usefulness of some fruits in particular cherries, sour cherries e sour cherries that manage to keep excess uric acid at bay and have anti-inflammatory power. Green light therefore to:

• Vegetable fresh and seasonal (to be limited a little only the one rich in purines such as spinach, asparagus and cauliflower)

• Fruit fresh and seasonal (to limit only the very sugary persimmon, figs, grapes and bananas).

• Legumes (to limit a little only those rich in purines: peas, beans, lentils)

Always valid advice in case of gout is to limit foods of animal origin as much as possible which in the metabolism of our body tend to make us accumulate uric acid.

• Beer and alcohol in general

HOW TO COOK FOOD

As always, the way in which food is cooked is also important. The cooking to be preferred I'm:

Frying is not recommended and in general the use of fatty condiments. 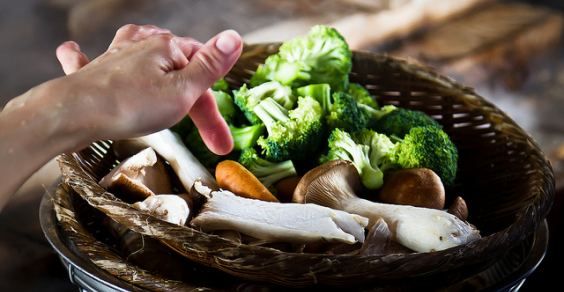 It is always good to combine a healthy and balanced diet withmoderate physical activity that helps maintain the right weight but which has also shown beneficial effects on excess uric acid.

In case of gout it is essential drink plenty of water, which is important for detoxifying the body and thus eliminating uric acid. 2/3 liters of water are the recommended dose, to drink as much as possible between meals. It is important to take a lot of fluids also to avoid the onset of kidney stones, another possible consequence of an excess of this acid. You can then help drain the body with some natural remedies as well, ask your herbalist or doctor for advice if you are taking medications at the same time.

Staples with air fryer: the recipe and the tastiest variations ❯

add a comment of Gout: diet and recommended foods