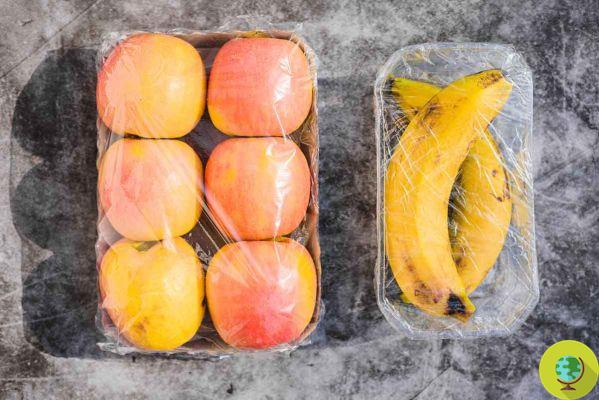 Lidl Switzerland, in collaboration with the Materials Science Laboratory (Empa), is developing a new ecological film to coat the fruit and vegetables that are sold in its stores. The special protective film is obtained from fruit and vegetable waste.


It is now clear that we must limit the use of plastic as much as possible and valid alternatives to this material are being sought all over the world. Plastic packaging in the food sector protects fruit and vegetables from spoilage, but also creates large amounts of waste.

From Switzerland comes a novelty in this sense. We are talking about the special plant-based protective film born from the collaboration between Lidl and Empa.

The new ecological film is made from fibrillated vegetable cellulose obtained from pomace, i.e. from pressed fruit and vegetable peels, those solid residues left after squeezing the juice. It is therefore an excellent system also for recovering vegetable waste.

The film is applied to the fruit by simply spraying over the coating or by dipping. The convenience is that, to eliminate it, just pass everything under running water. Furthermore, as Empa writes:

Being harmless to the consumer, it can also be consumed without any problems. The potential of the cellulose coating is far from exhausted: it is possible to add additives such as vitamins or antioxidants, etc.

The great advantage of this alternative is not only to avoid the use of plastic but also the ability to keep fruit fresh longer than synthetic films, effectively avoiding a greater number of food waste.

In tests conducted by Empa laboratories, it was found that the shelf life of bananas could be extended by over a week.

The innovative film developed by Empa will be tested and further improved over the next two years together with Lidl Switzerland and a fruit and vegetable supplier. The aim is to use the new technology in all more than 150 Lidl branches in Switzerland.

add a comment of Goodbye plastic, Lidl develops edible film based on food waste for fruit and vegetables