Glycemic index: why it matters and what low GI foods are


We talk more and more often aboutindex glicemico and the importance of choosing foods that have it low not just for those who suffer from diabetes but also for those who want to stay healthy for longer.

Eat foods with a low glycemic index in fact it helps to prevent diabetes, obesity, cardiovascular disease and more generally to maintain a good body metabolism.

This parameter (IG) is useful for classify foods according to the effect they have on blood sugar, that is, on the level of glucose in the blood. Therefore, foods with high GI are divided, i.e. those that are rapidly digested and metabolized, causing blood sugar peaks, those with medium GI for which the peak is more contained and low GI, or slow digestion and absorption foods that produce gradual increases in blood sugar and insulin levels.

For the measurement of the IG glucose is taken as a reference point, which corresponds to 100 on the glycemic index scale, all the other foods in the tables are inserted according to the score assigned to them ranging from 0 to 100. It is calculated by testing, on healthy people, how much blood sugar increases after consuming a food that has a standard amount of carbohydrates (50 grams), compared to the same amount of glucose (taken in the form of sugared water).

They generally consider themselves low GI foods those that appear to have a value equal to or less than 55, with a medium GI from 56 to 70 and a high GI more than 70. The tables do not always report exactly the same data but in any case, most of the time they do not differ significantly so much that a food passes from the low GI range to that tall. Among other things, it must be considered that the same food can have two different GIs depending on the cooking method with which it is prepared. 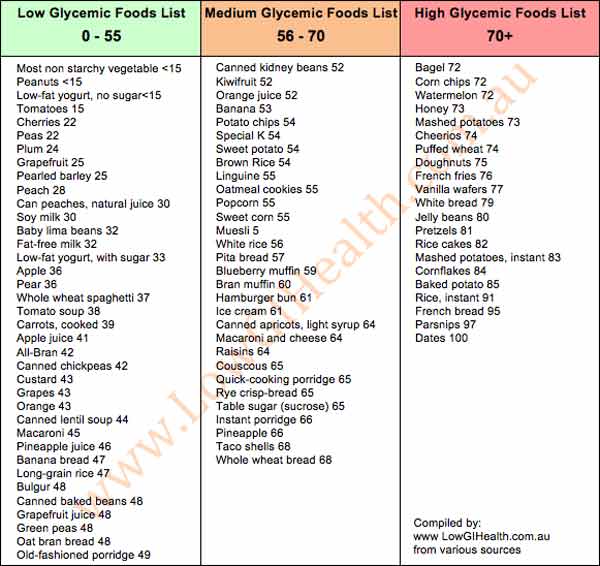 Low glycemic index diets have been shown to improve both glucose and lipid levels in people with diabetes (type 1 and type 2) and have benefits for weight control because they help delay hunger. As early as 1999, the World Health Organization (WHO) has recommended that people in industrialized countries opt for a diet based on a good amount of low-glycemic index foods for prevent the most common diseases of well-being, such as coronary heart disease, diabetes and obesity.

Ma which foods have the lowest glycemic index that we should include in our diet more often?

In general, most of the vegetables are low GI, therefore green light depending on the season for spinach, celery, leeks, fennel, asparagus, cabbage and broccoli of all kinds, peppers, onions, cucumbers, courgettes, radishes, chard, artichokes , eggplant. There is talk of a GI estimated at 15/20. Instead, pay attention to potatoes which, depending on how they are cooked, have a minimum GI starting at over 70!

Legumes such as soy, red and black beans, cannellini beans, borlotti beans, lentils, azuki, chickpeas, peas are all low on the glycemic index.

A GI of about 30 is that relating to both skimmed and whole milk but also milk derivatives such as ricotta and yogurt do not help to quickly raise blood sugar.

It is difficult to find cereals with low GI, the one that has the lowest glycemic index is thebarley followed by wild rice. Among the "non-cereal" cereals we can instead include quinoa while at medium GI we point out oats, buckwheat, brown rice and rye. Always keep in mind that whole grains and consequently the flours obtained from them have a lower GI compared to the refined counterparts and are therefore in any case to be preferred in view of a diet that wants to contain the glycemic index.

READ also: Carbohydrates: which ones to choose based on the glycemic index?

Then there is a simple trick to reduce the GI of foods which are consumed and is to add the right amount of fiber, the foods that contain them are in fact able to keep blood sugar at bay. HERE you will find some foods that are very rich in it.

Glycemic index and load: here's how to choose carbohydrates at the table

add a comment of Glycemic index: why it matters and what low GI foods are