On the market there are numerous types of bread prepared with gluten-free flours, enriched with legume and seed flours, let's see together the characteristics

Bread is a food that more than others reflects the culture of a country and, in every area of ​​the world, the cereals used to make bread are historically those grown in the area.


Bread can in fact be prepared using various cereal flours that include corn, millet and buckwheat, as well as wheat. Cereals other than wheat have always been used in bread-making and in recent years, breads prepared with cereal flours. gluten-free have spread even more, due to the increase in cases of celiac disease.

What is gluten, what it is used for and how it can be replaced

Gluten is the protein fraction of cereals and is mainly composed of proteins called glutenins and gliadins.

In some cereals, gluten has protein sequences which, in predisposed people, cause symptoms of celiac disease. These cereals include wheat, spelled, spelled, triticale, barley and rye, products that must be excluded from the diet of those who are intolerant to gluten.

Gluten has no particular benefits from a nutritional point of view and, in the preparation of bread, it mainly has a structural function: that is, it allows the formation of a protein network that gives structure to the bread.

Generally bread is prepared with wheat flours precisely because these contain a protein fraction, consisting of gluten, which gives rise to the formation of the protein network.

The challenge of companies that produce breads with flours obtained from gluten free cereals is to create the right mix of ingredients, so as to be able to obtain a stable protein network and at the same time a soft and fluffy bread.

Today it is possible to obtain breads with these characteristics thanks to the use of gluten-free but protein-rich flours and the addition of legume flours, which increase the protein content in the bread.

These are tasty breads and also good for health as they are rich in fiber, proteins, vitamins and minerals. 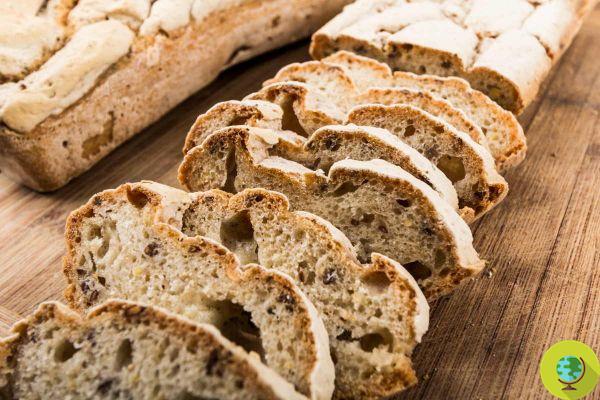 Today on the market there are numerous types of bread prepared with gluten-free flours, often enriched with legume and seed flours that give structure, nourishment and taste.

Gluten-free bread is made using flours obtained from the grinding of naturally gluten-free cereals.

To prepare a loaf, ideal for croutons and bruschetta, you can use, for example, rice flour, mixed with millet and quinoa flour, and with the addition of extra virgin olive oil to make soft and fluffy bread to be consumed at the table or to be used also to prepare toast and sandwiches.

Millet is a cereal that does not contain gluten but is rich in proteins, minerals and trace elements which contribute, among other things, to the beauty and health of the skin, hair, nails and bones.
Quinoa, on the other hand, is a pseudo-cereal which, thanks to its amino acid pool, represents one of the best vegetable protein sources in the world, as well as providing the body with a good amount of fiber, vitamins and minerals.

These gluten-free breads can be consumed by everyone, both by celiac people and by those who want to introduce different foods in the diet to vary their diet, as they offer the possibility of experimenting with new flavors and taking nutrients that are important for well-being and health.

Paracetamol increases the risk of strokes and heart attacks. ❯

add a comment of Gluten-free bread: types of bread and cereals used