“Girls develop breasts at age 8 due to the bisphenol in plastic”, say the experts 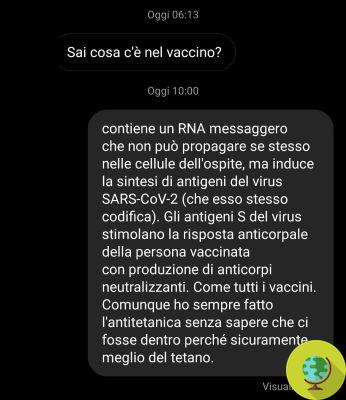 Plastic is a huge problem for the environment and our health: it pollutes the oceans, causes precocious puberty, cancer and liver damage

When plastic arrived on the market for the first time, consumers were delighted with this new material indestructible and versatile. Dishes, unbreakable glasses, waterproof shoes, stain-resistant fabrics: plastic represented a real revolution.


But, at the time, they were completely ignored consequences for the environment and health of this miraculous material. It was not known, for example, that plastic would take hundreds of years to disappear from land and oceans or that exposure to bisphenol A would cause precocious puberty in girls or that perfluorooctanoic acid (PFOA) would damage our liver.

Today we know this well, just as we know that due to plastic, the next generations will have to live with millions of plastic particles scattered on the planet and in their bodies.

To reflect on the huge problem caused by plastic is Linda Birnbaum, toxicologist and former director of the American Institute of Environmental Health who, in an interesting interview with the Avant-garde, told of his concerns about this material that changed our lives forever, which he has been dealing with for years in his scientific research.

Birnbaum says her wedding gifts included a full set of plastic plates and cutlery. She loved it, because it was much more modern than silver but just as durable, unaware that that very resistance would pose a huge health risk.

“Many types of these plastics have been tested on people and we know they are; but most of those plastics are man-made substances we created in laboratories and are not found in nature. They are a danger, ”explains the toxicologist.

The problem concerns all plastics, starting with polyvinyl chloride, known as PVC, developed in the first half of the 900th century.
To this is added the even more dangerous PFOA, a synthetic carboxylic acid that practically never disappears from the environment and from our organism.
Perfluorooctanoate, salt of perfluorooctanoic acid, contains fluorine molecules and is used in the production of fluorinated polymers used to make clothes, shoes, tools of all kinds.

“If you're going to buy hiking gear or a new carpet today, it's likely they've been waterproofed with a layer of those PFOA insulation.
It's great to walk through a puddle in those waterproof boots and not get wet. But it is not natural. Nor is it natural for a carpet not to get stained.
The PFOA miracle that repels stains or water from the boots you sink into puddles and snow with without getting wet is actually a time bomb.
Everything lasts longer with that protection. This is the problem: that PFOA never disappears and accumulates to levels that harm us all, ”explains Birnbaum.

And to the question "what are the damage caused by these substances?", The toxicologist replies:

"After conducting studies in groups of over 70.000 people, we know they have been associated with cancer risk, effects on our hormonal system, hypertension during pregnancy, increased cholesterol and fat in the liver, and the breakdown of blood and the immune system. ".

The problem is not only with PFOA, but many other compounds that do not exist in nature until they have been created by man.

Another example is the bisphenol A, fundamental substance in the synthesis of polycarbonate plastics, epoxy resins and other polymeric materials.
Polycarbonate is in turn used to produce food and beverage containers, bottle teats, protective liners for cans and jars, and domestic tanks for the storage of drinking water.

Although the behavior of BPA in our body is still unclear, it has been known since the 30s that this substance can mimic the action of estrogen, the female sex hormones. Recent studies have shown that exposure to bisphenol A can induce precocious puberty in girls, who can develop breasts as early as the age of 8. This can also happen if the mother is exposed to BPA during pregnancy.

The effects of bisphenol A on reproduction, fertility and the endocrine system are still the subject of scientific debate, but it is becoming increasingly clear that plastic, from miraculous material, turned out to be a huge problem both for our health and for the environment.

The only possible solution seems to be that of revolutionize our way of producing and our consumption. What happened with plastic should make us think: before we put a new material on the market, we should analyze yours long-term adverse effects and do not limit ourselves to evaluating the practical and economic benefits in the immediate future.

Also, we should accept that a plate can break, a carpet can get stained, a pair of shoes can get soaked if we jump into a puddle, as there is no point in destroying the Planet and putting our health at risk for this kind of comfort. .

add a comment of “Girls develop breasts at age 8 due to the bisphenol in plastic”, say the experts