Ginkgo biloba: is it possible to eat the nuts of the trees that we find in the city? Only if you follow these precautions

Parks and cities can be rethought as food sources: it is the so-called urban foraging. But, pollution aside, which plants and fruits are edible? Can Ginkgo Biloba, now widespread in our cities, be eaten? Only the seed and following these precautions

If there was a need to collect spontaneous plants in the city, despite the pollution, what would be available? In a historical moment like this, in my opinion it is important to be able to identify any photo of food, because ... you never know (!) And in nature survives those who are more adapted to the environment in which they live, whatever it is.


Gingko Bilboa is a tree now cultivated wherever there is a temperate climate as an ornamental plant, in particular for the beauty of its fan-shaped leaves, which in autumn turn a beautiful golden yellow color. The Ginkgo Biloba plant is native to China.

The ginkgo biloba trees were practically extinct. Here's how we saved these living fossils

Western scientists first learned of the existence of ginkgo in the late 1600s, when it was seen in China. His name means silver apricot.

The fruit of Ginkgo Biloba 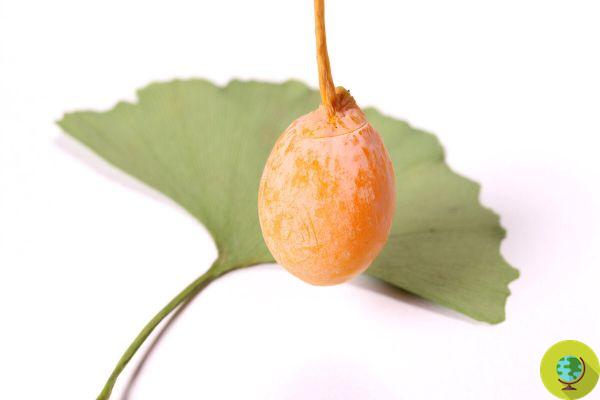 Many have noticed the fruits of Gingko, which are produced only by female plants and which once fallen to the ground give off a nauseating smell as they rot. Since it is impossible to recognize male and female plants when the plant is small, we also find in road trees and parking lots female plants full of fruit that begin to ripen in autumn and fall slowly, persisting on the plant until January-February. The damage they can create to the cars and nostrils of those who pass under them is not insignificant.

These fruits also contain some substances that make them toxic and able to cause dermatitis and burns on contact, so never try to eat them, even when ripe, as it is written in some article on the net, you would find yourself in the hospital at the first bite. So remember to wear rubber gloves when handling these fruits, especially if they are very ripe and lose juice.

Walnuts also contain these toxic substances, which are however eliminated by the long washing and cooking process. This long process gives you the idea of ​​the effort our ancestors made when, in times of famine, they had to find at their own expense the way to make edible what was not, obtaining food and thus managing to survive without poison yourself. 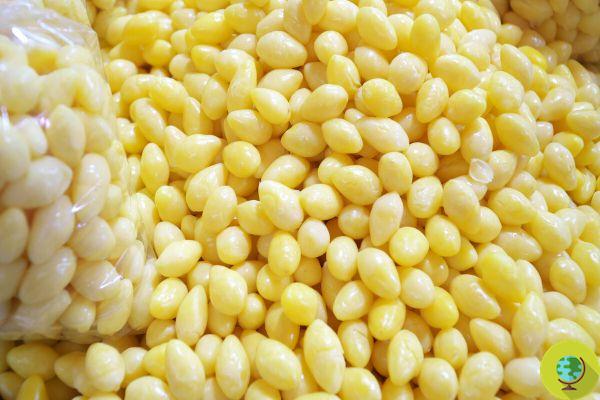 Il sow that contain these species of yellow and smelly cherries after a long process it becomes edible and in the East it is considered a delicacy worthy of a 5-star restaurant and if you eat a few accompanied by a good cup of tea. Ginkgo nuts are renowned in China for being very healthy, stimulating the brain, preventing Alzheimer's and other degenerative diseases. The Japanese love them, they are nutritious, they contain vitamins A, B, C, proteins, iron and potassium.

First, after harvesting, it is necessary to separate the pulp of the ginkgo fruit from the walnut and how easily it succeeds if you soak the fruits in water for an hour or two before attempting to separate them: the fruit is softened by the water and it easily slips away from the seed, which will then be squeezed out like pre-sour cherries. The pulp should be thrown into the compost bin.

Rinse the walnuts one last time and once they are clean put them in a static oven to dry at 80 ° C for about an hour, they will be ready when the shells become white and dry.

Now you can keep your walnuts in a glass jar and take a dozen to consume immediately. But they are not yet edible: before eating them, they must be cooked again by tossing them in a pan with a drop of oil until the inside of the dull green walnut becomes translucent. Some recipes include cooking them in the oven at 200 ° C or putting them in a paper bag and then in the microwave. Methods that I have not tested and of which I cannot tell you the timing.

Instead you will find the complete procedure in the video:

You can eat Gingko nuts alone, to best enjoy their flavor, or add them to soups and other dishes as they do in Japan.

The important thing is to eat these nuts sparingly, as a precious delicacy: do not consume more than twenty a day and avoid giving them to children because there are cases of people who have eaten about fifty nuts and ended up in hospital. Ginkgo nuts contain Ginkgotoxin (methylpyridoxine), which prevents the depletion of vitamin B6, the lack of which can cause severe symptoms such as vomiting, diarrhea, difficulty breathing and loss of consciousness and usually begin to appear within 12 hours after eating Ginkgo nuts.

In a cup of rice cooked in Japan they add a dozen nuts.

Now you decide if the long work to make them edible is worth it. The taste is good in my opinion, but I don't think I will repeat the process except in case of extreme famine.

On ginkgo biloba and spontaneous plants you may also be interested in:

Facial gymnastics: what it is, benefits and exercises ❯

add a comment of Ginkgo biloba: is it possible to eat the nuts of the trees that we find in the city? Only if you follow these precautions