Ginger, what are the scientifically proven properties and benefits of this prodigious rhizome? We know ginger both as a spice to add an extra touch of taste to our dishes and as a powerful natural remedy used for centuries for health and well-being.

Ginger, what are the scientifically proven benefits and properties of this portentous rhizome? We know ginger both as a spice to give an extra touch of flavor to our dishes and as a powerful one natural remedy used for health and well-being for centuries.


Ginger is a truly precious treasure and, like turmeric, it is packed with properties and health benefits that science is gradually deepening. There natural medicine and popular has known for centuries ginger as a marvelous natural remedy. In particular, ginger is a spice that revitalizes and rejuvenates. Let's find out what are the benefits of ginger that science has already confirmed.

Ginger as a natural pain reliever

A study conducted by researchers at the University of Copenhagen showed that ginger, in the form of an extract, has an important pain-relieving and anti-inflammatory effect equal to that of some drugs such as ibuprofen. The usefulness of ginger as a pain reliever was further tested in a study dedicated to osteoarthritis.

Read also: GINGER BEST OF MEDICINES AS A PAIN RELIEF

Ginger is rich in antioxidants

Ginger is effective in calming nausea and vomiting

One of the most common uses of ginger is related to its ability to calm vomiting and a sense of nausea. A review of the studies on ginger as a natural remedy from this point of view highlighted its effectiveness in case of nausea and vomiting related to chemotherapy, seasickness and post-operative phase.

READ also: GINGER, A REMEDY TO BRING IN YOUR SUITCASE

A 2010 ginger study found that taking 2 grams of ginger per day for 11 consecutive days it is useful for significantly reducing muscle aches, particularly when related to exercise and training in the gym. Taking ginger may not have an immediate effect but it helps reduce the progression of muscle aches day after day. 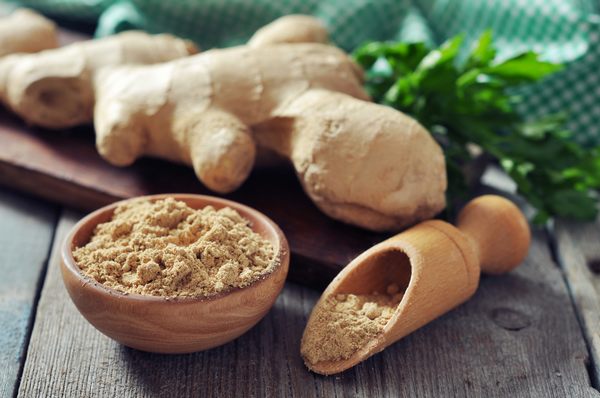 Osteoarthritis is a health problem that involves the degeneration of the joints in our body and that causes pain and a feeling of stiffening. One study conducted on 247 people with knee osteoarthritis found that patients taking ginger experienced less pain and consequently found themselves taking fewer pain relievers than patients who were not using ginger as a natural remedy.

Ginger and diabetes. This is a fairly recent area of ​​research. A study conducted in 2015 found that ginger may have potent antidiabete properties. The 41 type 2 diabetes patients who participated in the study by taking 2 grams of powdered ginger per day benefited from an unexpected drop in blood sugar levels. 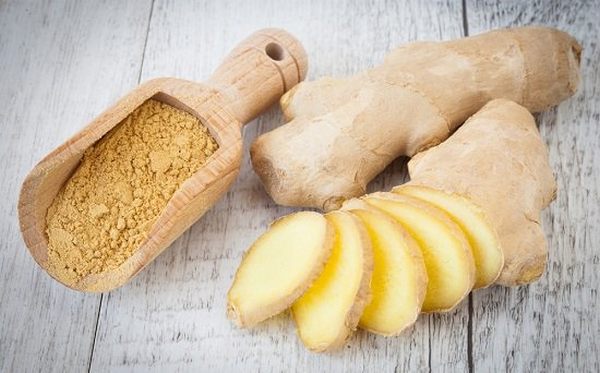 Dyspepsia is a condition related to digestive difficulties and the appearance of pain in the upper part of the stomach. Ginger can help you digest better and make your stomach empty faster. The researchers tested the effectiveness of taking 1,2 grams of powdered ginger before meals to speed up stomach emptying. Consumption of ginger is recommended to prevent and treat indigestion. Here and here two studies on the subject.

Natural medicine uses ginger to relieve pain, especially menstrual pain. In a study dedicated to the effectiveness of ginger on menstrual pain 150 women were asked to take 1 gram of powdered ginger per day in the first 3 days of menstruation. Ginger has been shown to be as effective in reducing menstrual pains as medicines such as ibuprofen.

High levels of LDL cholesterol are linked to an increased risk of heart problems. Ginger can help lower cholesterol according to one study of 45 days conducted on 85 patients with high cholesterol who were required to take 3 grams per day of powdered ginger. This remedy led to a noticeable reduction in their cholesterol levels.

Gingerol, the main active substance contained in ginger, can contribute to lower the risk of infections. Science has shown that ginger can be effective in inhibiting the proliferation of different types of bacteria and in particular to counteract those bacteria that cause inflammation of the oral cavity, such as gingivitis and periodontitis. Here and here two studies on the subject. 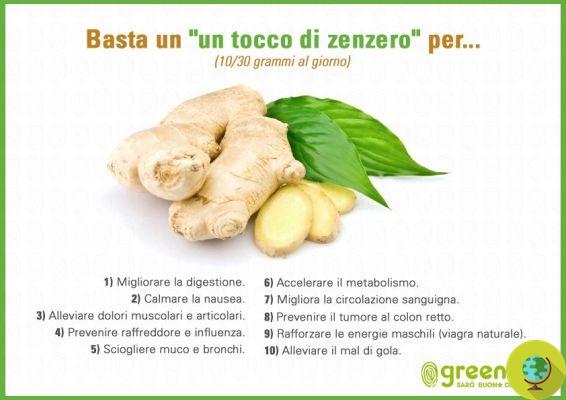 To learn more about the properties, benefits and uses of ginger, look at ours video with the advice of doctor Loreto Nemi.

Have you ever used it ginger as a natural remedy? Did you find it effective?

Ginger and moringa: what happens to the body when using them together with two cups of herbal tea a day ❯

add a comment of Ginger: all scientifically proven properties