Gastritis: causes, symptoms, remedies and everything to know

What are the causes of gastritis? And what is the best diet to follow?

With gastritis one indicates inflammatory condition (inflammation) affecting the gastric mucosa and which presents with severe abdominal pain, burning and acidity. This inflammation can have various degrees, from simple redness (hyperemia) to small excoriations (erosions), and can manifest itself with a short episode or can be of long duration. But what are the causes of gastritis? And which one is the best diet to follow?


Gastritis has a very high incidence almost all over the world, especially in the more civilized areas of the West and among women. There is one acute form, which has milder symptoms, and one chronic form, which generally causes more important symptoms and disorders for very long periods in the course of life.

The causes can have various origins and can often also occur concurrently: stress, wrong diet, wrong drug therapies or, in the most serious cases, a heartbeat.

What is gastritis, types and causes

One can distinguish between acute gastritis, usually due to indigestion or poor nutrition, and chronic gastritis, mostly due to a Helicobacter pylori infection (but there may be other factors as well).

With acute gastritis we refer to forms of transient gastritis, marked with numerous erosive lesions (distinct from ulcers) small and bleeding. Sometimes these forms of gastritis may have no manifest symptoms, other times they present themselves immediately as serious pathologies with massive bleeding and risk for survival.

The most common forms of acute gastritis are:

Acute lesions usually disappear within 48 hours. It is about superficial ulcerations that on histological examination - unlike solitary peptic ulcers - do not deeply go beyond the muscularis mucosae (or lamina muscularis mucosae, a band of smooth muscle located inside the mucous membrane).

Chronic gastritis, in which the erosive component is missing, most of the time leads back to Helicobacter pylori infections. But other factors could also favor the chronic variant of gastritis.

1) type A, or fund: rare and more frequent in the elderly, it develops in fundus and in the great curve of the stomach. It is an autoimmune disease that causes the production of autoantibodies against the parietal cells of the stomach. Chronic type A gastritis can cause:

2) type B, or of the antrum: which is the form supported by Helicobacter pylori and can remain asymptomatic for many years. Over time it causes peptic ulcer and gastric cancer.

1) chronic non-atrophic gastritis: which is mainly localized in the antrum of the stomach and can evolve into duodenal peptic ulcer
2) chronic atrophic gastritis (multifocal atrophic gastritis or atrophic pangastritis): which has the antrum as its initial site but then has the ability to extend towards the body and the bottom of the stomach affecting the oxyntic cells (parietal cells or oxyntic cells, glands located in the body and in the gastric fundus). Can evolve into a gastric peptic ulcer and has a fairly high risk of neoplastic involution.

Summarizing, therefore, when the mucous membrane that protects the stomach walls weakens, gastric juices inflame the organ and in some cases damage it. Gastritis appears, especially if other factors come into play:

Acute gastritis has an onset sudden and in most cases it causes nausea, heartburn or stomach discomfort.
On the other hand, chronic gastritis develops more gradually and causes severe stomach pain, a full stomach feeling or loss of appetite. In many cases it can happen that chronic gastritis does not have any physical symptoms.

In general, the symptoms of gastritis are: 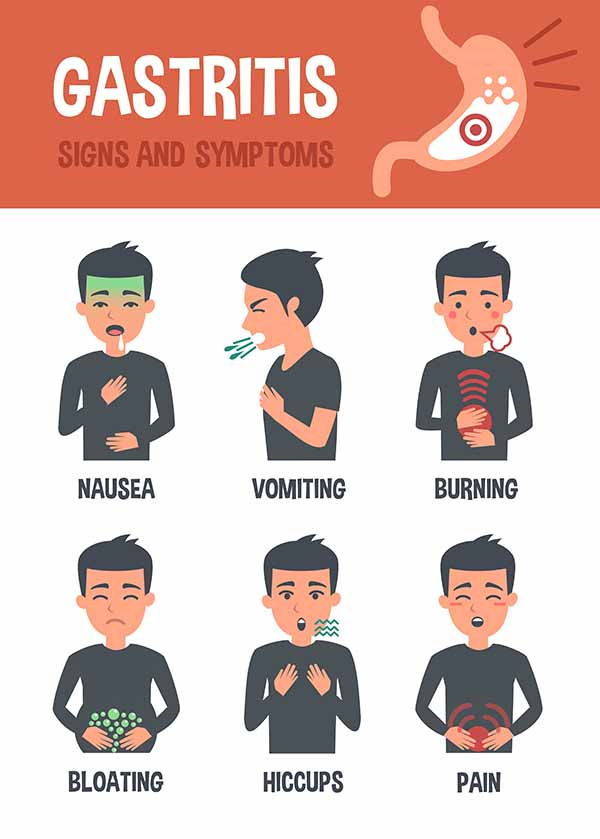 In all cases you should always contact your doctor, but do not waste any more time in case you have symptoms related to possible gastric bleeding such as:

The therapeutic pathways for most cases of gastritis include theuse of drugs that reduce or neutralize stomach acid. But, as we have seen, often the ailments due to gastritis derive from a wrong lifestyle: this is why many times it could be enough reshape the eating style (if episodes of gastritis or stomach acid are frequent, consider eating lighter and more frequent meals to reduce the effects of stomach acid), eliminate smoking and alcohol, to practise regular physical activity and reducing stress, which not only lowers the immune system, but also increases the production of gastric acids by slowing down digestion. 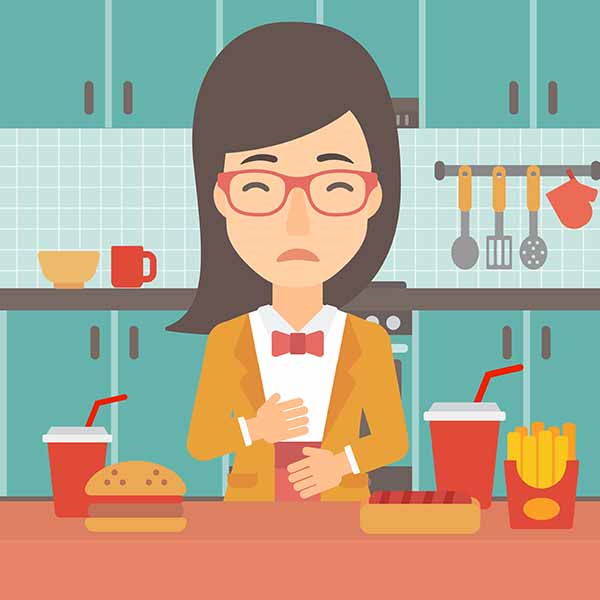 In case of gastritis it is not recommended to consume:

On the subject you can also read:

relieve the symptoms of gastritis, you can easily refer to a number of useful natural remedies.

Psychosomatic gastritis, the burning that comes from within and speaks to you about you ❯

add a comment of Gastritis: causes, symptoms, remedies and everything to know