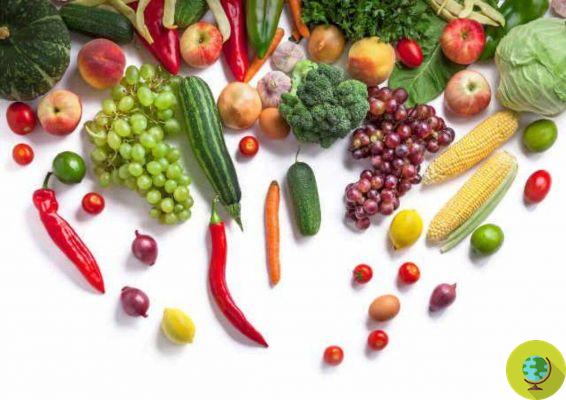 Eating lots of fruit and vegetables puts you in a good mood, according to a new study.

Fruits and vegetables to go and mood to the stars! That's right: eat fruits and vegetables regularly not only keeps in line, protects against tumors, preserves the health of our heart and gives us a lot of coolness in these days of intense heat, but it would make us happier too.


The British researchers at the University of Warwick are ready to swear it, who in a study published in the American Journal of Public Health analyzed for the first time the repercussions on psychological well-being of the consumption of fruit and vegetables.

According to scholars eating lots of vegetables today guarantees a high level of happiness for years to come and good mood it would increase for each additional daily serving, up to a maximum of 8 servings per day. In addition, the greatest benefit would be obtained within a couple of years of changing the diet for those who go from zero to 8 servings a day.

OUR OFFICE - The British researchers conducted the investigations in collaboration with the Australian University of Queensland. The tests involved 12.385 adult participants who were asked to keep a food diary for several years as part of the Household, Income, and Labor Dynamics in Australia Survey. The "food diaries" were then compared with other data relating to employment status, income and other conditions of life that could determine their happiness. Scholars have thus been able to verify that people who have gone from a reduced consumption of fruit and vegetables daily to healthier habits, with an intake of up to 8 servings a day, have shown in a short time positive effects on mood, sometimes even within 24 months.

“Eating fruits and vegetables apparently increases our happiness much faster than it improves human health. People's urge to eat healthy foods is undermined by the fact that physical, health benefits, such as protection against cancer, are felt decades later, ”explains Andrew Oswald, one of the authors of the study. The improvements that affect our psyche, on the other hand, are faster and more immediate and they can help lead people to more sustained consumption.

READ also: PROSTATE CANCER: IT IS PREVENTED WITH YELLOW AND GREEN VEGETABLES

Therefore not only a panacea against all evil, but also a cure-all in terms of psychological well-being and a juicy antidepressant. (Re) start consuming lots of fruit and vegetables and you won't be sorry!

Seasonal fruit and vegetables: what we bring to the table in April ❯

add a comment of Fruits and vegetables, natural antidepressants!