Fruit muesli: pesticide cocktail and too much sugar, Vitalis worse brand than the German test 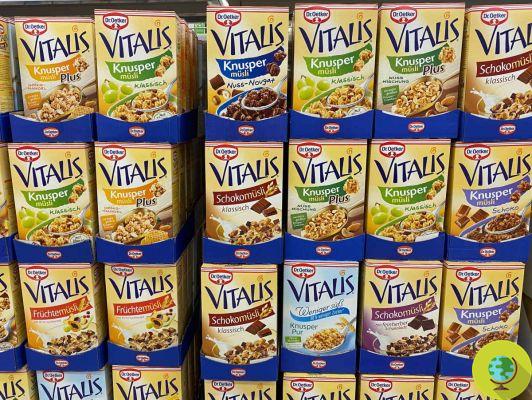 Consuming packaged muesli is not always the best way to start the day, given the high content of pesticides

Consuming packaged muesli is not always the best way to start the day, given the high content of pesticides often hidden in the product


Many think they are good for their health by buying muesli to eat for a healthy and nutritious breakfast, but in these mixes of cereals and nuts - in addition to hiding huge amounts of hidden sugars that are anything but healthy - residues of chemical pesticides can also be hidden. highly toxic to health, albeit within the limits of the law, and in rarer cases, even pesticides that are not legal in the European Union.

Eco test bought and analyzed 50 famous brands of fruit muesli, with a fruit content between 7% and 55%; 29 of the products were of organic origin. Laboratory tests revealed the presence of traces of numerous pesticides in many of the products analyzed, with a negative record of 31 different pesticides found in a single product. What surprised the authors of the test was the discovery of the presence of a pesticide banned in the EU in products destined for the European market: this is possible because not all the ingredients that make up the finished product come from EU cultivation, but they come from countries with more permissive laws on the matter.

Some of the pesticides banned in the EU are the famoxadone (a fungicide used against various fungal diseases on fruit vegetables, tomatoes, potatoes, cucurbits, lettuce and grapes), chlorpyrifos (a pesticide used to kill parasites, insects and worms), permethrin (powerful pesticide) e triadimenol (a fungicide active against infections coming from the seed or from the soil and spread by the wind): these and other substances are prohibited within the EU as they are poisonous to insects and birds, but also because they endanger the health of agricultural workers as well as of consumers due to their mutagenic or carcinogenic properties.

Finally, potentially carcinogenic but not yet officially banned from EU agriculture is glyphosate, whose massive use also endangers biodiversity: the test found traces exceeding the permitted limits in five of the fruit muesli analyzed.

The Vitalis brand Dr. Oetker fruit muesli was the worst in the test, since it not only contains traces of 14 pesticides, but among these there are also those prohibited in the EU: this is the case of chlorpyrifos, which the European Union has banned since the beginning of 2020, as it would modify the genetic makeup and neurological development, and would cause permanent damage to the brains of fetuses.

How was this possible? The company that produces Vitalis, explains Ökotest, has used raw materials produced in developing countries, where there are probably more lax rules on the use of pesticides: the raisins present in muesli, for example, come from Chile and South Africa. In general, small pesticide residues in food do not pose a serious risk to the health of consumers - however, being aware of their presence, it is certainly better not to consume these products which, in addition to being harmful to us, also pose a threat to the environment. Because the legal limits currently do not consider the cocktail effect.

Unfortunately, illegal pesticides are not the only flaw in the Vitalis branded fruit muesli, "condemned" by the test also for its excessive sugar content - a good 28 grams per 100 grams (in practice, more than a quarter of the product is sugar). This is too high by the standards recommended by the World Health Organization (WHO), which recommends adults a maximum daily consumption of 50 grams of sugar. In short, the overall assessment made by the German agency is "unsatisfactory".

How can we avoid filling up on harmful chemical pesticides and sugars from the first light of the morning? A solution that allows us not to give up the taste of a good muesli is to prepare it at home, carefully choosing the ingredients and being careful not to add sugars (HERE are some of our very simple recipes).

Buffalo mozzarella with caustic soda and tuberculosis: here are the companies that cheated consumers ❯

add a comment of Fruit muesli: pesticide cocktail and too much sugar, Vitalis worse brand than the German test