From the hallucinogenic tea of ​​shamans, the substance that could revolutionize the treatment of Parkinson's and Alzheimer's 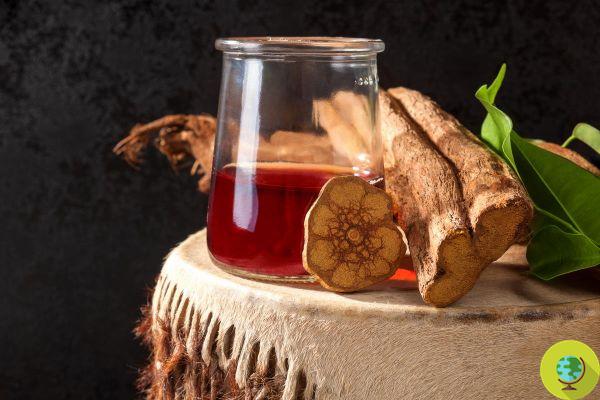 A study has shown that DMT, one of the main natural components of ayahuasca, promotes the formation of new nerve cells

One study showed that the dimethyltryptamine o DMT, one of the main natural components of ayahuasca, a hallucinogenic tea used as a spiritual medicine by the natives of the Amazon, promotes the formation of new nerve cells. A discovery defined as “with great therapeutic potential” for the treatment, for example, of neurogenerative diseases such as Alzheimer's and Parkinson's.


Ayahuasca is a South American drink commonly used by the Amazonian and Andean tribes, made by mixing two plants from the Amazon: the ayahuasca vine (Banisteriopsis caapi) and the chacruna shrub (Psychotria viridis). DMT, a natural component of this Amazonian ayahuasca tea, binds to the brain's serotonin receptor (5-HT), which increases its hallucinogenic effect. In this study, the receptor was changed to a sigma-type receptor that does not have this effect, "thus greatly facilitating its future administration to patients."

Neurodegenerative diseases, such as Alzheimer's and Parkinson's, are characterized by the loss of nerve cells or neurons. Although humans have the ability to generate new neurons, this process depends on several factors and is not always possible.

"The challenge is to activate our dormant ability to form neurons and then replace neurons that die from the disease," José Ángel Morales, PhD, researcher at CIBERNED and lead author of the study, said in a news release.

The research conducted by the Complutense University of Madrid (UCM) and published in the Translational Psychiatry journal of Nature, was conducted both in vivo on mice, but also in vitro on cells grown in the laboratory, demonstrating how the subjects treated with this substance showed "Greater cognitive capacity".

“The DMT present in the ayahuasca infusion promotes the neurogenesis stimulating the expansion of populations of neural progenitors and inducing the differentiation of these [neural stem cells]. Furthermore, the neurogenic stimulation observed after DMT treatment correlates with an improvement in spatial learning and memory tasks, ”the researchers wrote.

"This ability to modulate brain plasticity suggests that it has great therapeutic potential for a wide range of psychiatric and neurological disorders, including neurodegenerative diseases," Morales concluded.

In recent years, another study in Nature conducted on volunteers had shown that ayahuasca was also particularly useful for treating depression.

From cracked heel to swelling, what do your feet say about your health? ❯

add a comment of From the hallucinogenic tea of ​​shamans, the substance that could revolutionize the treatment of Parkinson's and Alzheimer's