Fregula (fregola) with lentils and courgettes

The fregula is a typical Sardinian durum wheat semolina pasta. Reminiscent of couscous, but its grains are larger. The fregula, before being packaged, is toasted. The roasting gives it an unmistakable flavor, much more decisive than that of couscous. The fregula differs from couscous also for cooking, which is very similar to that of any type of pasta. 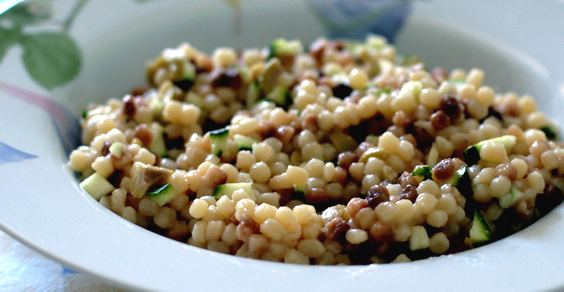 How to prepare the lentils and courgettes fregula, a tasty and very easy to cook complete first course.

La fregula (or fregola) is a paste of durum wheat flour typical of Sardegna. Remember the cous cous, but its grains are larger. Before being packaged, the fregula grains are toasted. The roasting gives an unmistakable flavor, much more decisive than that of couscous. The fregula differs from couscous also for cooking, which is very similar to that of any type of pasta.

The size of the fregula grains is somewhat reminiscent of the cous cous israeliano, whose grains are medium in size, compared to the Moroccan couscous that we normally find in supermarkets, with a much finer grain. The fregula can be found quite easily in the most well-stocked grocery stores, in the pasta or rice department.

The taste of fregula goes very well with vegetables and with vegetable. For this reason, to prepare it, I decided to use both lentils that the zucchini, which I was still able to collect in the garden. To cook the lentils, follow the instructions on the package at your disposal, to understand if soaking is necessary (it depends on the type of lentils purchased). To make the recipe even more special, I added to the ingredients ofsultana.

Start preparing the fregula from cooking lentils. Pour them into a low-sided pan covering them with boiling vegetable broth, twice their volume (always check the cooking instructions for lentils on the package). If you want, add some chopped carrots and onions to flavor them. Cook the lentils until they have absorbed the cooking broth. It usually takes about 25-30 minutes.

When the lentils have arrived halfway through cooking, pour the dried sultanas into a glass full of water to soften it. Wash and cut the courgettes into cubes and brown them in a pan with a tablespoon of extra virgin olive oil and a teaspoon of chopped rosemary. Bring a pot of water to a boil, as for cooking pasta.

When the water has boiled, pour the fregula, together with a handful of coarse salt, preferably whole. The cooking timea is of about 10-12 minutes. The fregula grains should be al dente, but not hard inside. When the fregula is almost ready, check the cooking of the lentils and add them to the courgettes. Add the drained sultanas to the sauce ingredients. Stir and sauté briefly in the pan. 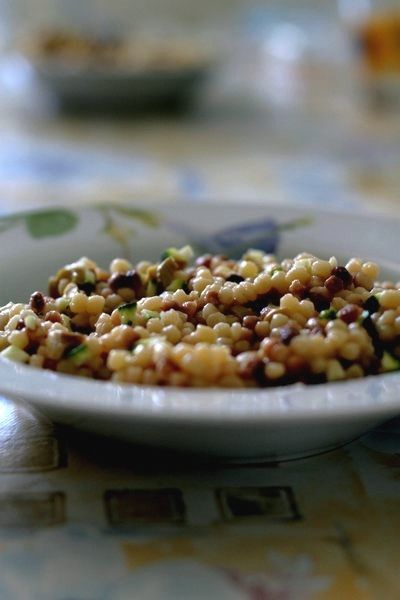 At this point it should be time to drain the fregula. Then pour it back into the pot and add all the ingredients for the sauce. Mix everything with a wooden spoon and flavor the fregula with two spoons of extra virgin olive oil and with a spoonful of chopped rosemary. Serve the fregula hot, like first course.

For other recipes with lentils see also:

For other recipes with zucchini see also:

Lentils: properties, benefits and how to choose them

Do you hang out with a psychopath? Here are the signs to watch out for ❯

add a comment of Fregula (fregola) with lentils and courgettes