Food poisoning: how to protect yourself from foodborne illnesses 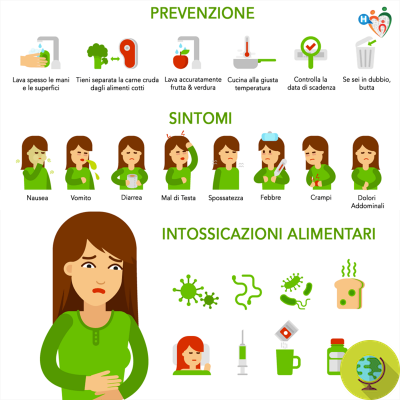 But what is it that causes food poisoning? Pathogenic microbes, such as bacteria, viruses, parasites or other toxins found in contaminated foods. Many of these microbes are usually found in the intestines of animals. And precisely for this reason, the main source of food-borne diseases is meat.

The holiday season is about to end and like every year thousands of people have been affected, unfortunately also in our country, especially in this period by dangerous poisoning caused by ingested food. Abdominal cramps, vomiting, diarrhea are the most common symptoms, but when it comes to real food poisoning the pains increase, our body becomes dehydrated and we can be hit by cold and chills.

But what is it that causes food poisoning? Pathogenic microbes, such as bacteria, viruses, parasites or other toxins found in contaminated foods. Many of these microbes are usually found therethe intestines of animals. And for this very reason the main source of foodborne illness is meat.

According to a report published by the EFSA (European Food Safety Authority), in 2007, in total the Member States of the European Union, had reported well 5609 cases of food epidemics caused mainly by bacteria such as Campylobacter, Salmonella, Listeria and by viruses that enter the body via the gastrointestinal tract. Not to mention the latest cases of food poisoning that have resulted in deaths due to the killer bacterium of the strain of Eschericia Coli.

The vehicle for the Campylobacter bacterium (which is the most common bacterial cause of diarrhea in the EU) is raw chicken meat. The same thing goes for the Salmonella which is a bacterium commonly found in the intestines of birds and mammals. It can be transmitted to humans through food, in particular through meat and eggs. Although less common in humans than those caused by Campylobacter and Salmonella, Listeria infections are instead responsible for a high mortality rate, and ready-to-eat foods, such as cheeses and fish or meat products, often cause infections in humans.

Unfortunately the foods we ingest and that cause a'food poisoning they can be contaminated at any stage of the food chain: from slaughter to processing, but even in our kitchen, where microbes can be transmitted from one food to another through the tools used for preparation or simply because we have not provided for proper washing, storage or cooking.

So knowing that nowadays food-borne diseases are more and more frequent, our best weapon against any type of food poisoning is precisely the prevention, and then let's see what we can do for reduce the risk of a provoked intoxication from what we ingest.

If our immune defenses are too low, our bodies will be more likely to be more susceptible to dangerous pathogens. We must therefore make sure that we eat plenty of fruit and vegetables first, that we assimilate the right amount of proteins and vitamins and that we eat enough whole grains for adequate protection of the intestinal flora.

Wash your hands thoroughly before preparing or eating food

Contamination of food by dirty hands it is one of the most common causes of many cases of food poisoning. Always washing your hands thoroughly before and after handling food at home or in restaurants is a simple precaution that we must take every time we get ready to sit at the table.

Even fruit or a very tasty lettuce leaf can be the source of food poisoning if we have not taken care to wash it properly. In fact, washing fruit and vegetables or any food that we do not intend to cook very well is one of the main precautions to be taken. However, this does not mean leaving the food under running water for half an hour. This gesture would only result in a huge waste of water. While to have greater food hygiene, just immerse what we bring to the table in the sink filled with water and a few tablespoons of bicarbonate that will naturally disinfect our foods.

When it comes to food safety, a very important issue is that of the proper cleaning of the kitchen, the realm where our food is prepared and eaten. It is in fact essential to keep every space, where you plan to cook and any tool you intend to use extremely sanitized. But to find out more, you could consult our 7 Tips on how to avoid food poisoning in the home kitchen

Whether you do this in your home or restaurant, eating food that hasn't been cooked properly can lead to bad food poisoning. In fact, some foods such as eggs or some meats such as poultry can carry the bacteria that are the major cause of disease when they are not cooked long enough or in the wrong way.

So let's see how to cook meat, poultry and fish in the safest way

And finally, to know and select what we eat, the best solution is to buy food products directly from the farmer or from farms in the area. Obviously, for a healthy and nutritious diet, there is nothing better than eating organic, fresh and seasonal products.

add a comment of Food poisoning: how to protect yourself from foodborne illnesses