Food and drink packaging: which is the safest material?

Food packaging, what is the safest material? European consumers are increasingly attentive to food safety and the health problems that poorly stored packaged foods could cause. The role of packaging, from this point of view, is of vital importance.

Food packaging, what is the safer material? European consumers are increasingly attentive to food safety and the health problems i packaged foods badly preserved could cause. The role of packaging, from this point of view, is of vital importance.


An independent research proposed by Friend of Glass and conducted on 8000 people has revealed that among European consumers there is a growing concern about chemical substances that could migrate from packaging to food. Two-thirds of respondents (66%) admitted they were concerned about food contamination. 8 out of 10 consumers fear that the chemicals used in packaging can alter food and drinks, making them unsafe for health.

The biggest concerns relate to plastic packaging, which are the most feared compared to the other types indicated in the survey, including metal, cardboard, paper and glass. For a greater safety, Consumers tend to buy more packaged foods and drinks glass packaging. For 61% of the interviewees, glass represents the safest material for health. The figure is up compared to the 48% recorded in 2010.

Consumers today are not only attentive to the labels on the packaging, but also to the packaging materials. Among the most cautious are parents with young children. 77% prefer to keep the baby food in glass containers and avoid buying food or drinks in plastic packaging.

Dieter Schrenk, expert in pharmacology and toxicology ofKaiserslautern University, in Germany, stressed that the problem of the migration of substances from packaging to food and drink is an issue that should not be underestimated. Plastic, metal, paper and cardboard have in the past been relevant sources of unwanted chemicals in food. In his opinion, however, the risk of food contamination in similar cases is low, but further research will be needed to investigate the subject from a scientific point of view.

Il glass is considered the safest material for the packaging of food and drinks. In fact, it acts as a natural and impermeable barrier and does not interact with solid or liquid foods. In the United States, glass is the only material deemed truly safe from a food packaging point of view by Food and Drug Administration.

When theXNUMX-XNUMX business days, in 2011, he decided to ban the BPA is preferably used for production of baby bottles, pointed to glass as a safe alternative for health. Meanwhile, the European Commission is working to strengthen legislation on chemicals released from food packaging to their content. The preferences for safety could be precisely glass, a material inert from a chemical point of view and able to protect food and drinks from external contamination. 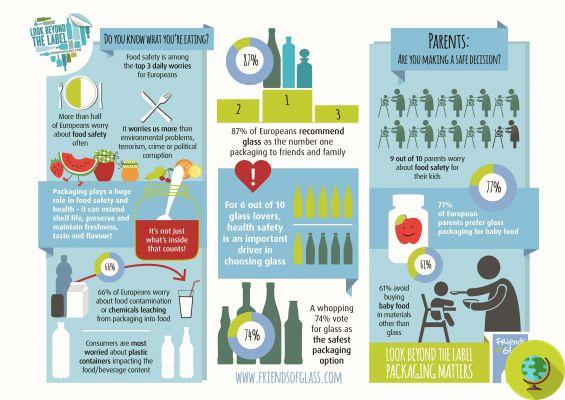 Specialties Thu il survey on the safety of packaging.

Shock images on cigarette packs, do they really work? I study ❯

add a comment of Food and drink packaging: which is the safest material?