Fonio: the gluten-free African super cereal that promises to fight famine and drought

Fonio is an ancient grain of African origin that is grown in rural areas of Senegal and in other areas of the continent. Few people know about it but it has recently returned to the fore as it could be a solution to fight famine and drought.

Il funio it is an ancient cereal of African origin that is grown in rural areas of Senegal and in other areas of the continent. Few people know about it, but it has recently made a comeback as it could be a solution to fight famine and drought.


Fonio is among the oldest cereals used by humans for their food and it seems that as early as 5000 BC it was cultivated in Africa. The white fonio is obtained from the Digitaria exilis, a herbaceous plant of the Graminaceae family, but there is also the black fonio whose production takes place starting from the Digitaria Iburua.

The renewed interest in this cereal has its concrete reasons. On a nutritional level, the main characteristics it boasts are that it is gluten-free, contains four times the protein, three times the fiber and almost double the iron compared to brown rice, as well as many mineral salts (magnesium, calcium and zinc). It is no coincidence that it is considered a "super wheat" which among other things has a low glycemic index.

It is then a light and easily digestible cereal (on the other hand it takes more to satiate) that resembles the best known and most used couscous in appearance.

The fonio is also very interesting from an environmental point of view and extending cultivation in Africa could really make a difference for the population often affected by drought and famine. Because? Its grains need very little water to be able to grow (among other things it is able to obtain it even at a depth of 3 meters), it can be harvested three times a year and its long root system helps to fight erosion of the soil. It is evident that it lends itself well to being grown in arid areas and where drought is the order of the day.

For this reason, there are those who consider it a possible concrete solution to hunger, drought, poverty and the migratory crisis that is registered in the areas of sub-Saharan Africa.

Fonio contains about 400 calories per 100 grams. It is a cereal rich not only in carbohydrates but also in proteins.

100 grams of fonio provide our body with:

In the following table you can see the comparison between the major nutrients of fonio and those of brown rice in percentage. 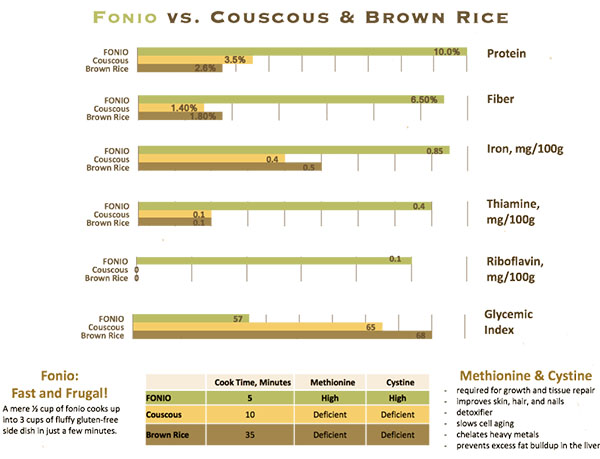 Cultivation and sale of the fonio

Currently, fonio is cultivated throughout the rural area of ​​Senegal and in equally poor areas of the African region of the Sahel, a sub-Saharan strip that extends from the Atlantic Ocean to the Red Sea. Precisely in this area of ​​the world, among other things, the population is expected to increase by 50% by 2050 despite being a place strongly affected by climate change. 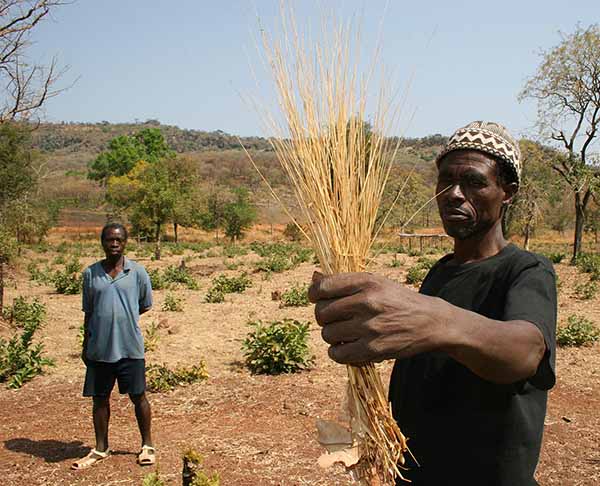 Fonio has also recently arrived outside the continent of origin. Last July a Whole Foods store in Harlem (New York) decided to buy it and make it available to its customers. And the success was not long in coming, the first supply of this cereal was exhausted in just three hours.

You can also buy fonio at another store of the same chain in Los Angeles or online. Marketing it at the moment is Yolélé Foods, a company that is attempting to create the first global supply chain for this super grain.

In fact, he is founding in Dakar (the capital of Senegal) the first fonio industry in the world which could prove to be an aid to the local economy based on the relaunch of a local product. However, there are obviously several production and distribution problems to overcome as well as criticalities in cultivation.

The processing of the fonio is in fact long and the productivity low. This grain is harvested by hand with the help of the sickle and the stems are collected in bundles but great care must be taken so that the grains do not fall during transport.

Will fonio really make it into the new quinoa and thus feed Africa?

A curiosity about the fonio

According to a typical Mali legend, the world was born from a grain of fonio. According to the Dogon (local people) Amma, the creator of the universe, made his magnificent work by exploding a single grain of this cereal.

Then there is an African proverb that says “with the fonio the cook can never be ashamed”. This cereal is in fact considered a delicious food and is usually eaten accompanied by bean leaves.

On other grains and nutritious foods that could "feed the world" also read:

add a comment of Fonio: the gluten-free African super cereal that promises to fight famine and drought