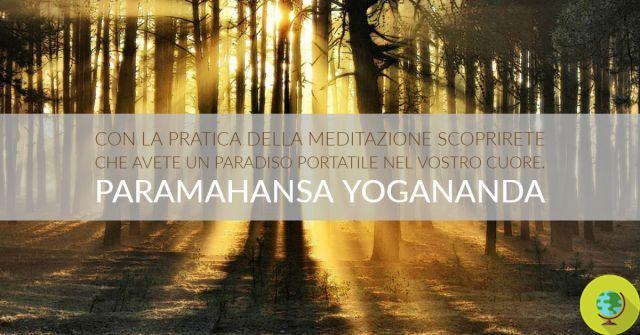 A 100% green and low cost influenza vaccine? Meditation, which is confirmed as an effective weapon to prevent and combat the symptoms of flu and colds.

To reveal yet another benefit given by meditation practices it's a new one study, led by a team of researchers from the University of Wisconsin-Madison, which reveals how this activity is one natural and effective tool against respiratory diseases, flu and colds.

Just in the era in which the the validity of traditional flu vaccines (a real business for pharmaceutical companies) is questioned, it turns out that for prevent symptoms and seasonal ailments just take a few minutes to dedicate to meditation: a green practice, at no cost and without side effects!

The researchers - coordinated by Professor Bruce Barrett - arrived at this conclusion after making a t8 weeks east on a group of volunteers: 154 adults, of both sexes, randomly divided into three groups. The first underwent a period of training in mindful meditation, the second group of volunteers was instead initiated into a fitness program, such as a brisk walk, and finally the third group, which did nothing (defined as the control group. ).

At the end of the test, the researchers monitored the health conditions of all the volunteers from September to May, to verify their well-being, with particular reference to symptoms such as sore throat, runny nose, sneezing, bone pain, etc.

Conclusion?
The volunteers belonging to the meditation group were absent from their workplace due to illness 76% less than in the third group that he had not done any activity.
Those who had practiced physical exercise were instead absent from work 48% less (again compared to the third group).

And that's not all: from the results of the study, published on Annals of Family Medicine, it turned out that meditation mindfulness has reduced the intensity of acute respiratory infections, while exercise reduced them by up to 40%.
Also, the participants in the meditation group are there sick for fewer days: 5 against 8 of those who had not done any activity.

"Nothing has previously been shown to prevent acute respiratory infections," Dr. Barrett said in the UWM note. "Much previous information has suggested that meditation and exercise may show preventative benefits, but high-quality, randomized trials have never been conducted. Injectable flu vaccines are partially effective, Barrett continued, and only work for the three flu strains each year. The obvious 40-50% benefit of mindfulness is a very important finding, as is the 30-40% benefit of training. If this is taken into account in future research, the impact could be substantial. "

- Influence? Here are the natural remedies to prevent it

- Meditation increases the "gray matter" of the brain

- Meditation for physical and mental well-being

. 10 reasons to practice yoga (including sex)

add a comment of Flu: Meditation the best vaccine