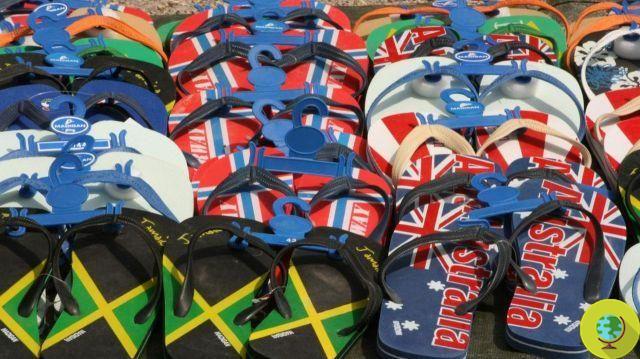 English doctors also sound the alarm on flip-flops. A few weeks ago it was the turn of the American podiatrists, who had remembered that it would be better to avoid wearing flip-flops as usual footwear to avoid damaging the feet and altering the posture.


English doctors are also sounding the alarm on thongs. A few weeks ago it was the turn of the American podiatrists, who had mentioned that it would be best to avoid wearing flip flops as usual footwear to avoid ruin your feet and alter posture.

According to British doctors, flip flops can cause plantar fasciitis or inflammation of the Achilles tendon. The reference is in particular to the continuous use of flip-flops, both in plastic and in leather.

The main problem is soon said. The fact that you have to hold on to your flip flops by squeezing your toes while walking causes one strong arch tension. Rubbing can cause cuts and blisters between the big toe and second toe but also cracks in the heel.

Doctors do not ask you to throw away your flip flops, but to try not to wear them every day and for very long and to alternate them with shoes with medium or low heels. According to Tariq Khan, expert at the University College Hospital of London, flip flops are still the worst shoes we could wear.

In his opinion, the ideal shoes should have a heel of about 3 centimeters. Lifting your heels in this way protects them from foot-related ailments and inflammation. Also British doctors remember of do not wear flip flops while driving, because this bad habit is responsible for 1,4 million road accidents every year. In particular, 1 in 9 motorists would have got a flip-flop stuck under a pedal. Driving in flip flops is not prohibited by law, but it is highly discouraged.

The negative consequences of wearing flip-flops include posture imbalance, awkward gait, risk of tripping, overloaded heels, exposure to germs and bacteria, corns and blisters. Useful advice for those who still do not want to give up flip-flops? Wear them a little less often e do gymnastics with a ball under the arch.

Flip flops: 10 reasons not to use them according to American podiatrists
Pochet Flops: the recycled flip flops that are made in half
Walking: 10 reasons to do it at least 30 minutes a day