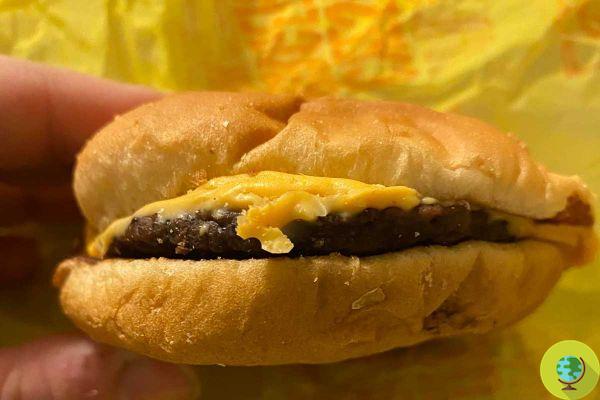 A woman found a McDonald's sandwich after 5 years and it is still perfectly intact, similar experiments have been done several times

In America, a woman accidentally found a McDonald's cheeseburger that we could define as "vintage" in an old bag forgotten in a closet. In fact, it was purchased in 2017 but, to date, it is still perfectly preserved. However, this does not surprise us that much.


It is not the first time that a McDonald's sandwich has been found intact after many years, testifying to how many preservatives and other questionable substances the ingredients contain.

But also of the latest hamburger with fries sold in Iceland (a country where McDonald's has not existed for several years), preserved in a case as if it were a relic. Read also: Iceland's latest McDonald's burger turns 10 and is still whole

Now a new "find" confirms that McDonald's sandwiches are truly indestructible and stand the test of time. This time this time a woman from Washington, Megan Condry, told the story of her cheeseburger, which remained in a bag for 5 years on Facebook.

It was in fact purchased on May 5, 2017 and today, after all these years, it still keeps well: both the bread, the meat and the cheese are solid and do not even smell or show traces of mold. The woman in the post explains that:

I bought it for lunch one day on my way to work and forgot about it and then found it in the back seat 5 days later. I decided to keep it because in the 5 days it hadn't gotten moldy, smelled or looked bad so I wanted to see what it would do after a few years. It's been in my closet ever since in a bag. No smell, mold, looks like the day I bought it.

Also in this case, therefore, the experiment had a positive outcome, if we can say so: Mc's sandwiches are indestructible and resist intact over time. We can well imagine the reasons ...

Megan Condry has already made it known that she has repackaged the sandwich and put it back in the closet where she will leave it for another five years to see if and how it has changed. In the meantime, after this experiment, you said you no longer eat at McDonald's.

Withdrawal for these curcumin supplements: brand and batches ❯