Fibromyalgia is also called fibromyalgia syndrome or Atlas syndrome. It is characterized by chronic widespread muscle pain associated with stiffness. The causes and possible treatments are controversial and are still being studied.


La Fibromyalgia it is also called fibromyalgia syndrome o Atlas syndrome. It is characterized by chronic muscle pain diffuse associated with stiffness. The causes and possible treatments are controversial and are still being studied.

However, some have been identified painful spots common in fibromyalgia sufferers. These points are used to understand if the patient has this syndrome. The symptoms of fibromyalgia mainly concern the presence of pain in different parts of the body. Frequent painful conditions and sensations can lead patients to have difficulty falling asleep and even suffer from depression.

With regard to causes of fibromyalgia, science is still investigating them. Among the hypotheses are an abnormal perception of pain by the nervous system, possibly due to numerous changes in neurotransmitters in the central nervous system. For example, we can speak of fibromyalgia as a pathology of intercellular communication.

Se we imagine our organism like a computer, in fibromyalgia all peripherals are intact and able to collect information correctly, but the data, once sent centrally, are interpreted incorrectly, so the pain perception on the part of those suffering from fibromyalgia it can be continuous and / or very high.

In fibromyalgia pain can appear in different forms, from a constant slight aching to acute pain. The pain, however, is focused on very specific points, called tender points. With acupressure on these points it is possible to evoke the corresponding pain.

Among the symptoms that can occur in people suffering from fibromyalgia we find insomnia or unrestful sleep, decrease in muscle strength in the hands and arms, stiffness, night cramps, headache, anxiety, depression and panic attacks, hypersensitivity to heat, cold or humidity and photophobia.

I standard treatments for fibromyalgia include pain relievers and antidepressants. These drugs can reduce symptoms such as pain, fatigue and insomnia but do not solve the root problem. The pains return once the effect of the drug wears off.

A research report from the Jesse and Julie Research Foundation ha detected and sometimes medicinal treatments are ineffective and they can also cause side effects that are hard to bear. According to the authors, those who cannot do without drugs in case of fibromyalgia should still rely on complementary therapies.

The following image represents the painful spots associated with fibromyalgia by the 'American College of Rheumatology. 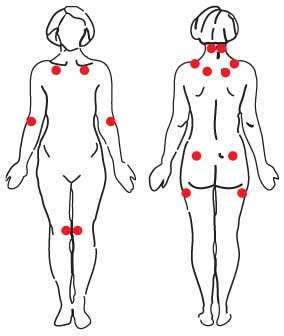 Here are some dealternative treatments possible to improve the condition of those suffering from fibromyalgia, remembering that each case is different and that each patient can benefit from different approaches.

Several studies show that a practice regular Yoga can help relieve the symptoms of fibromyalgia. For example, researchers from the Oregon Health & Science University have reported that Yoga exercises reduce pain related to fibromyalgia. One 2011 study found that fibromyalgia patients who took a 75-minute yoga class twice a week for eight weeks experienced less pain. They also had lower levels of the stress hormone cortisol in their blood.

La meditation can change the way the brain processes pain signals? According to the Australian rheumatologist Daniellewis this is really possible. According to the expert, meditation could also change the functioning of the brain and improve the symptoms of fibromyalgia. A review of studies conducted in 2012 reported that meditation provided pain relief in patients. Researchers believe that meditation helps to calm the mind and contributes to rest and relaxation of the body, which in this way has the possibility of self-healing.

THEacupuncture is an ancient type of pain treatment that originated in China. One study conducted in 2006 he has been involved in acupuncture with respect to patients suffering from fibromyalgia. Those who had undergone acupuncture treatments experienced an improvement in fatigue and anxiety. A meta-analysis conducted in 2013 led to similar results.

Il Tai Chi it is an ancient practice of Chinese origin that involves the body with slow and delicate movements. It has shown some potential in helping fibromyalgia sufferers. In one 2010 study participants took 60-minute Tai Chi classes twice a week or had a stretching or wellness education class. Tai chi practitioners experienced the greatest improvements in pain, sleep quality, depression and overall quality of life.

Il therapeutic lymphatic drainage massage, or manual lymphatic drainage therapy, would help the body get rid of waste and toxins. The rhythmic movements of the massage can stimulate the flow of blood and lymph and dissolve the muscle contractures and lymphatic blocks that can cause the typical pains of fibromyalgia. One 2009 study tested this type of therapy on a group of women diagnosed with fibromyalgia, who found an improvement in pain and quality of life.

Caramelized figs: the recipe for the perfect preserve for breakfast, alternative to jam ❯

add a comment of Fibromyalgia: Causes, Symptoms, and Alternative Treatments