Higher intake of fermented soy products such as miso and natto is associated with a lower risk of death, according to a new study.

La fermented soybeans reduces the risk of death. This was revealed by a new study conducted by a team of Japanese scientists. According to the analysis, increased intake of fermented soy products such as miso e natto, is associated with a lower risk of death than mortality.


The study published by The BMJ was led by researchers from the Japan Public Health Center-based Prospective Study Group.

The researchers studied the association between the consumption of different types of soy products and death from "any cause" and from cancer, heart and cerebrovascular disease, respiratory disease.

The study involved 42.750 men and 50.165 women between the ages of 45 and 74 who completed detailed questionnaires on their eating habits, lifestyle and health status. The number of deaths within the two groups was drawn from residential records and death certificates over a nearly 15-year follow-up period. 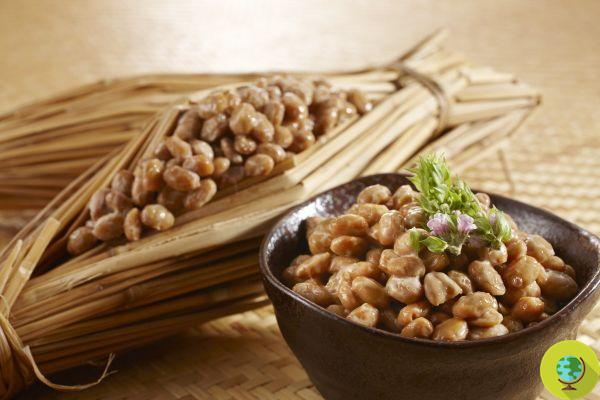 The researchers found that a 'higher intake of fermented soy (natto and miso) was associated with a significantly lower (10%) risk of all-cause mortality. Men and women who ate natto also had a lower risk of cardiovascular mortality than those who did not, but no association was found between soy intake and cancer-related mortality.

According to the researchers, the credit is due to the fact that the soy products are fermented richer in fiber, potassium and bioactive components compared to those of unfermented soy,

However, this is an observational study and the results should be interpreted with caution as they may have been influenced by factors not considered. More research will be needed

“To refine our understanding of the health effects of fermented soy and perhaps to inform about the development of healthier and more palatable products. These efforts should be collaborative, including not only researchers but also policy makers and the food industry, ”the authors say.

The benefits of fermented soy have long been known and the new study offers further confirmation. Will this be one of the secrets of Japanese longevity?

Soy: the whole truth. Properties, benefits and why not abuse them
Natto: what it is and how to prepare it at home

The solitude of hugs in our time ❯

add a comment of Fermented soy extends life. Miso and natto are good for the heart and brain. The Japanese study