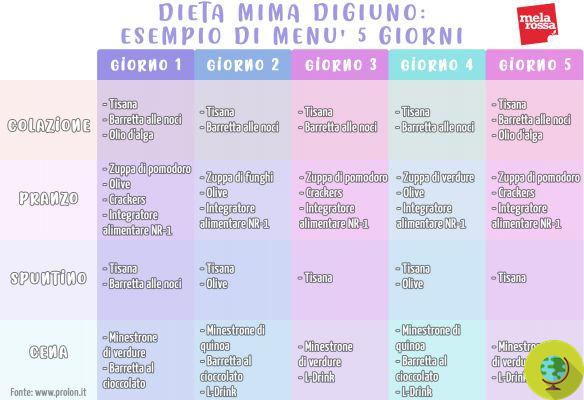 Cycles of a fasting mimicking diet would be able to reprogram the cells in the pancreas responsible for making insulin and thus reverse diabetes.


From a study published in "Cell" by the Longo team at the University of Southern California in Los Angeles and at the Firc Institute of Molecular Oncology-Ifom in Milan, it emerged in fact that cycles of fasting-mimicking diet would be able to reprogram the cells of the pancreas responsible for making insulin.

The cells, in essence, would actually come "reprogrammed”And they would go back to synthesizing good quantities of the hormone.

The fasting mimicking diet is a diet to follow for few days e rarely and which leads, according to the creator, to numerous benefits for the body because protects and rejuvenates cells, eliminating the damaged ones. The fasting mimicking diet is characterized by a low calorie regime (800-1100 calories per day with a very careful selection of foods), low in sugar and protein, but rich in unsaturated fats that may have "anti-aging effects”, Thus removing diseases related to aging.

READ also: FAST: 10 GOOD REASONS TO DO IT EVERY TIME

To investigate the effects of the fasting-mimicking diet on insulin, the researchers conducted experiments on human pancreatic cells from healthy subjects or with type 1 diabetes: when subjected to the test-tube mimicking-fasting diet, the production of insulin by these cells is effectively stimulated.

“This demonstrates on the one hand the possibility of reprogramming the cells only with diet, without altering the genome, on the other hand the potential use of food to reverse the symptoms of diabetes - explains Longo -. The implications then go beyond diabetes: the effects of the fasting-mimicking diet will be studied in other cellular systems, this mechanism has probably always been present and now that we have discovered it we need to understand how to use it and improve health ".

The results therefore suggest how a diet that simulates fasting can relieve diabetes in humans. We are talking about a dietary regimen that could lead to the reduction of risk factors not only for diabetes, but also for cancer and cardiovascular disease, including the reduction of abdominal fat, blood pressure and cholesterol. However, this type of diet also has some contraindications, which is why it is always necessary to consult your doctor first.

For further information: buy the book "The diet of longevity" by Valter Longo.

add a comment of Fasting-mimicking diet: because it helps fight diabetes