So-called "chemicals forever", starting with PFAS, have been identified in disposable food packaging sold by major fast food brands across Europe, including disposable paper containers used by McDonald's and Subway


Major fast food companies sell meals served in packages "intentionally treated" with harmful chemicals. This is suggested by the new study by a group of eight European non-profit organizations. The perfluorinated and polyfluorinated alkyl substances, the PFAS in fact, are a family of about 5 thousand different chemicals widely used in industry and production to make non-stick and anti-grease products, such as waterproof jackets, non-stick cookware, take-away food packaging, fire-fighting foam. and stain-resistant fabrics. In short, we find them everywhere.

According to the research - presented by the Czech NGO Arnika, in collaboration with the Health and Environment Alliance (Heal), Chem and 6 other non-profit organizations in Europe - on 42 samples sent for analysis, 32 samples including the packaging of the main global fast-food chains such as McDonalds, KFC, Subway or Dunkin Donuts have shown intentional treatment with perfluoro alkyl substances. 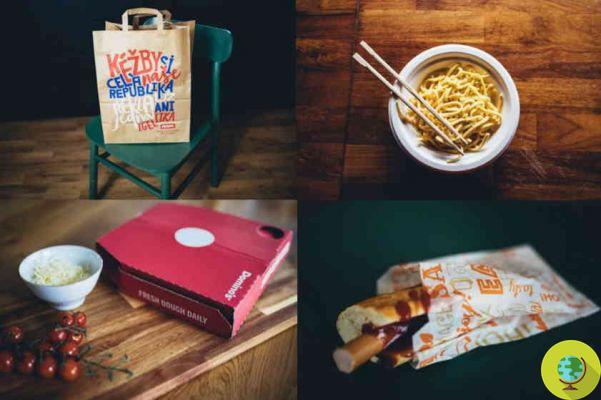 Some of the containers analyzed in the study

These are also known as "chemicals forever" because they are unlikely to degrade in the environment, leading to ever increasing levels of pollution and are - by now we know this well given the amount of news related to pollution from PFAS in Veneto - considered endocrine disruptors dangerous for development, also harmful to the cardiovascular system and linked to some forms of cancer.

According to the study, Pfas are widely used in food packaging and disposable tableware in Europe. 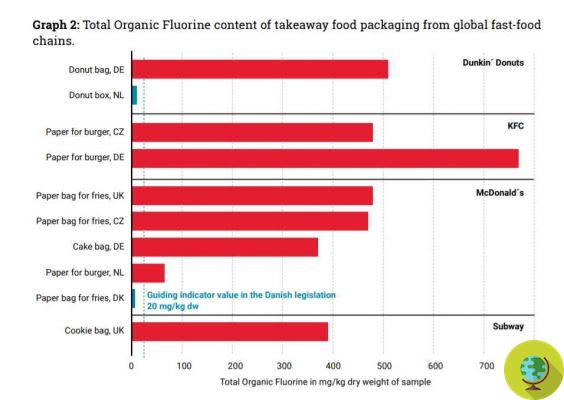 It is suspected that 38 of the 99 samples (38%) collected from takeaways, supermarkets and e-shops in 6 European countries (Czech Republic, Denmark, France, Germany, the Netherlands and the United Kingdom) have been treated with Pfas chemicals in order to obtain oil repellence - the researchers write - 32 of the 42 samples selected for chemical analysis (76%) show intentional treatment with Pfas.

Traces came out from all the samples selected for laboratory analysis, even samples not intentionally treated with Pfas, while one of the most delicate aspects concerns the fact that:

By definition and design, single-use packaging is thrown away immediately after being used. Because they are used in very high volumes, it creates a large amount of waste containing toxic Pfas chemicals. These 'forever' chemicals primarily pollute drinking water, remaining and accumulating in the environment and in the food chain.

And not only that, it has been amply demonstrated previously that those substances can arrive without problems from the packaging to the food, thus significantly increasing the overall exposure to Pfas of the general population.

The time has come for the European Union to take action and immediately and definitively ban the entire class of PFAS in food packaging, to protect consumers in the first place. Clearly, it is not essential to use highly toxic and persistent chemicals, which pose such a serious risk to health and the environment, in disposable food packaging, especially when there are safer alternatives, concludes Jitka Strakova, lead author. of the study and Arnika / Scientific Advisor of the International Pollutants Elimination Network (Ipen).

In Denmark, a ban on the use of perfluoroalkyl substances in the production of food containers has already been in force since 2020. It's time to all move in the same direction but how?

Given that McDonald's has managed to eliminate PFAS in their Danish fast-food restaurants, it is easily achievable for McDonald's to phase out PFAS from its food packaging globally long before 2025 - the study reads. 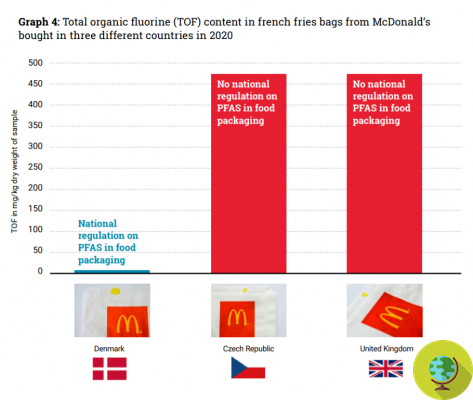 But let us remember that the use of Pfas in food packaging it's not limited to fast food chains. Indeed, the study shows that this also applies to small food businesses that serve their food in disposable tableware advertised as eco-friendly. This is the case of the interesting analysis carried out by the French magazine Que Choisir which examined almost 60 products and found that even the alternatives to plastic contain compounds that are undesirable for the environment and health. Read here all the results of the French test.

The different types of hugs and their meaning ❯

add a comment of Fast food containers, including McDonald's, are "intentionally treated" with PFAS, the European complaint study