FAO: the costs of malnutrition in the world are equal to the GDP of Germany 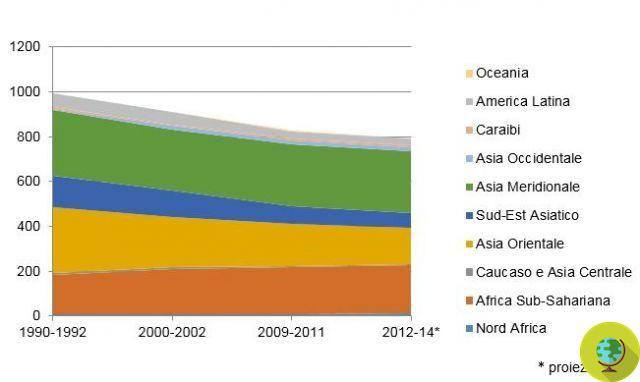 Malnutrition has unacceptable social and economic costs The problem therefore needs to be solved as soon as possible. FAO launches a real alert regarding malnutrition, highlighting that there are currently about 2 billion people suffering from it, due to the lack of micronutrients.

La malnutrition ha social and economic costs unacceptable. Equal to 5% of world GDP and equal to the entire GDP of Germany. The problem therefore needs to be solved as soon as possible. There FAO launches a real alert about malnutrition, show how they are at the moment about 2 billion people suffering from hunger and who fall ill due to a lack of micronutrients. Which translated into economic and social costs are close to $ 3,5 trillion a year.

The other side of the coin? It is the opposite situation to malnutrition due to malnutrition, given by the overweight and theobesity, cause of the "diseases of well-being". Worldwide, 1,4 billion people would be overweight, of which 500 million individuals would be obese. Ending malnutrition must be a priority, in the opinion of the FAO, due to its social and economic costs.

It is as stated by the FAO Director Josè Graziano da Silva, which would therefore like to urge greater efforts to eradicate hunger in the world. The appeal resounds in the newspapers on the occasion of the World Environment Day, which is celebrated today all over the world and whose central theme is constituted by fight against food waste.

The statements by the FAO director also come in conjunction with the publication of the annual report “The State of Food and Agriculture”, relating to the current state of the food system and agriculture. Between 2010 and 2012 approximately 870 million people suffering from hunger. However, this would only be a small percentage of the billions of people who see their lives and health at risk every day due to malnutrition.

The most worrying data concern the situation of children. Indeed, the FAO report shows figures that indicate that 26% of children under the age of 5 present growth disorders and suffer from rickets, while 31% are afflicted by deficiencies of vitamin A. The social costs of malnutrition are combined with economic costs.

I costs of malnutrition to the economy world are very high and can represent up to 5% of global gross GDP, corresponding to 3500 billion dollars, that is, 500 dollars per person. This is a figure corresponding to thethe entire GDP of Germany, according to FAO reports.

How solve such a serious situation? FAO highlights some aspects that should already be well known, but which in any case should have a greater influence on world food production. According to FAO, better food systems they can make food more accessible, varied and nutritious. The systems for growing, harvesting, processing and transporting food should therefore be changed for the better. Only in this way could the problem of malnutrition be solved in both its aspects: undernourishment and overnourishment.

Food waste: for FAO they could feed the whole of Africa

Fantastic tomato! The benefits confirmed by a mega study ❯

add a comment of FAO: the costs of malnutrition in the world are equal to the GDP of Germany