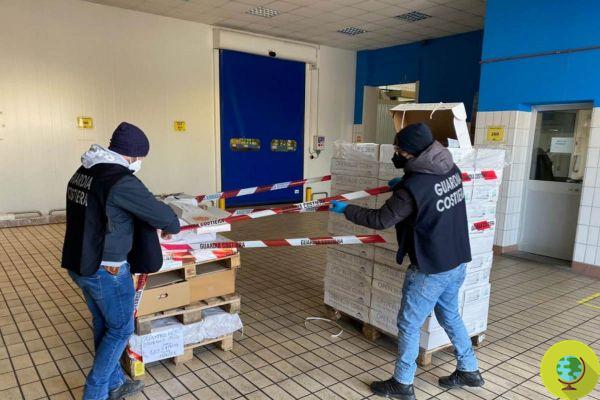 Expired tons of swordfish and tuna, not traced and illegally caught: maxi seizure between Veneto and Lombardy during the "Varuna" operation conducted by the Coast Guard

There are 8 tons of fish seized in recent days by the Veneto coast guard during the maxi operation "Varuna". The vast majority of the swordfish and albacore tuna, in fact, it was ready to be marketed without any mandatory labeling with traceability information, while several kilos of fish had even expired, therefore potentially dangerous to health.


The great operation, carried out at an interregional level to counteract the illegal fishing and controlling the fishing industry, involved 40 agents and 4 patrol boats of the Veneto coast guard. In total, 11 penalties were applied for over 19 euros. The 57 sweeping checks involved both retail and wholesale fish sellers, as well as fish markets and fish transport vessels.

During the activities, tons of swordfish and albacore tuna were found without labeling (mandatory at every stage of marketing, from capture / collection to sale and administration to the final consumer). Most of the swordfish found had been caught in the Mediterranean in a period - from 1 January to 31 March of each year - where fishing for this species is prohibited by law.

Furthermore, the regular self-control procedure based on the principles of the system was not applied within a Bergamo wholesale plant HACCP and expired fish products were found showing the minimum storage term exceeded of validity, for which the destruction was immediately triggered.

As is now known, fish is one of the foods most subject to counterfeiting and you have to be very careful when buying, reading the labels well to get transparent information on the type of product (often one species is passed off as another) and on the origin.

add a comment of Expired and untracked tuna and swordfish: maxi seizure per quintals of fish