Experts issue a terrifying warning, it's time to give red meat a cut 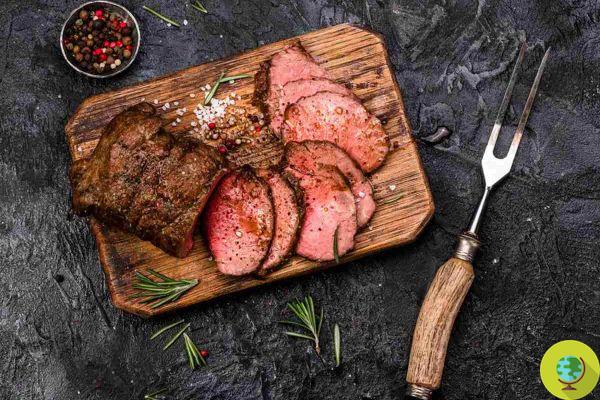 A new study once again confirms that eating red meat frequently exposes us to numerous health risks. In this case, the consumption of this food is related to the appearance of bowel cancer.

A new study once again confirms that eat red meat it frequently exposes us to numerous health risks. In this case we relate the consumption of this food and the appearance of bowel cancer.


According to the study, led by a team from the University of Oxford and partially funded by Cancer Research UK, eat even small amounts of unprocessed red meat once a day (i.e. a simple, slightly thick slice of roast beef or a rib of beef) once a day. lamb) increases the risk of bowel cancer by 20%.

The research was based on a sample of nearly half a million British men and women and found that even moderate consumption of ham and bacon was linked to an increased likelihood of developing this bowel disease.

Specifically, the people monitored for over 5 years were 475.581, all between the ages of 40 and 69. During this period, 2609 people developed bowel cancer.

The study found that those who consumed an average of 76g per day of red and processed meat had a risk of bowel cancer greater than 20% compared to those who ate instead 21 g per day.

The study also found that those who consumed a good intake of fiber from breads and cereals had a 14% lower bowel cancer risk.

Bowel cancer is the third most common type of cancer in the UK, with around 23.000 diagnoses per year. It is not the first time that the appearance of this tumor has been associated with the heavy consumption of red meat. However, new research suggests that even a modest intake of this food can have a significant impact.

Professor Tim Key, co-author of the study and an expert on the relationship between cancer and diet, said:

“Our findings strongly suggest that people who eat red and processed meat four or more times per week have a higher risk of developing bowel cancer than those who eat red and processed meat less than twice a week. (…) Most of the previous research has involved people in the 90s or earlier, and diets have changed significantly since then, so our study provides a more up-to-date view that is relevant to meat consumption today. "

Scientists, in light of the findings, recommend that everyone reduce their intake of red and processed meat to no more than twice a week.

add a comment of Experts issue a terrifying warning, it's time to give red meat a cut