Everything you don't know about who wears black

Dressing in black: what emerges from the studies of the psychology of color and clothing.

Black, as women well know, "fades". And then it gives a touch of elegance, perhaps even mystery, linearity. Finally, a not insignificant detail, it goes well with (almost) any other nuance. So humans - be they male or female - always end up having nice, solid, black pieces in their wardrobes.


Black, like any other shade, is not “neutral”: as chromotherapy reminds us, it carries within itself - due to its own characteristics - energetic and vibrational information. When we make a purchase or, in the morning, choose a certain dress with a certain color, we are oriented by the harmony that, at that moment, we have with that "vibration"; by carrying it often, however, that "information" is strengthened, nourished, sustained in us.

For this we need to be aware of it. In the end, it's a bit like eating chocolate: even if dark and rich in flavonoid benefits, it cannot become our main meal or the only food. Other nutrients and tastes are needed, it is advisable to vary, enrich, integrate. So in clothing, especially (but not only) black.

What the symbolism of the black color tells us about, what it “informs” us: it is formed in the absence of light and, for this reason, underlines and reinforces deep depression, sadness, black mood. A certain sustained and pleased melancholy. Lack of vision, lack of clarity, pessimism. The absence of vitality, death. Fear. It is the deep, the extreme yin, the deep hole that swallows. We know that black rejects light (and symbolically Light) or rather the skin penetration of the electromagnetic radiations of colors and cools. It puts a space away, it intimidates, it doesn't invite you to get close.

But it is also one of the two colors of the base chakra: together with red, it speaks of the roots, of the structure, of the life force. It refers to the mystery, to the intrigue of instinctual sexuality (by the way: although in the imagination it is a choice with possible seductive values, always wearing black underwear leads to a cooling of sexuality). Black is the color of the brave, fearless warrior who knows how to face his inner shadows and so also those that come from the world. It is the nuance that refers to control, severity, dominance, arrogance and power (a study has shown that wearing black favors the expression of aggressive behaviors and whoever wears that color is perceived, by others but also by oneself himself, as "more aggressive").

At this point, what can be hidden “behind” the choice of a wardrobe dominated by black? For example, the desire to protect oneself, defend oneself, not share too much of oneself, keep the distance or, on the contrary, create a difference in height, "get up" to dominate. Or the desire to create a slight mystery effect, an aura of intriguing unreachability .. available. Highlight the taste for an elegant, sophisticated touch. It can represent a state of mind that you are more or less aware of. Black is (also) favored by methodical people who don't appreciate change, who love the rigor and punctual precision of all the details and want to make sure everything is as it should.

Each color, with its shadows and lights, is useful and enriches our information. But it must be "measured out": a bit like chocolate, in fact. It is therefore a question of wearing a shade, choosing it aware of the effect it has on us unconsciously: this allows us to take advantage of its strength, of its vigorous and constructive impulse, without being slowly and imperceptibly "devoured" and devitalized.

Ps: if all this seems - despite the results of scientific research - a bit "science fiction", you can always try to observe in a new way the colors worn by others and the effect - almost imperceptible at first -, the impression this makes on us. Black included. It will be an interesting discovery. 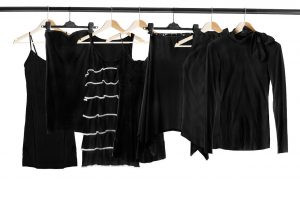 Everything you don't know about cashews. How they are born and curiosity ❯