Even China towards the nuclear fusion reactor: it reaches temperatures equal to 10 times that of the Sun 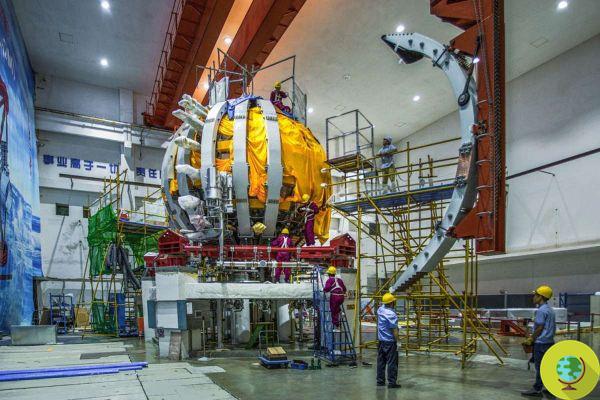 China announces that its nuclear fusion reactor, the HL-2M Tokamak, reaches temperatures equal to 10 times that of the Sun

As Korea celebrates the new KSTAR record, China announces that its nuclear fusion reactor, the HL-2M Tokamak, reaches temperatures equal to 10 times that of the Sun. But what are the differences? Are we really close to the path to clean energy without nuclear waste?


On December 4, China successfully turned on its nuclear fusion reactor, another "artificial sun," for the first time, marking a major step forward in the country's nuclear research capabilities. The device is an experimental research reactor where magnetic confinement nuclear fusion occurs, approved by the China Atomic Energy Authority in 2009 and independently designed and built by the Southwestern Institute of Physics of China National Nuclear Corporation (CNNC).

Like all tokamaks (acronym of a Russian expression meaning "magnetic toroidal chamber") it is a toroidal (donut) shaped machine where a hot and rarefied gas (usually hydrogen) (in the state of matter called plasma) is kept cohesive and away from the internal walls by a strong magnetic field created by devices external to the chamber and which actually surround it.

It had already been shown that the controlled thermonuclear fusion, that is the process by which nuclei of atoms merge, releasing a large amount of energy potentially usable as electricity, but without the risks and production of waste typical of nuclear fission plants (Read also: Chernobyl: Bumblebees are still at risk of radiation almost 35 years after the terrible nuclear disaster).

The HL-2M Tokamak adopts advanced structure and control method, reports the China National Nuclear Corporation (CNNC), and the plasma volume is more than double that of existing household devices, while the plasma current capacity is increased to more than 2,5 Megaamps with a plasma ion temperature that can reach 150 million degrees Celsius, about 10 times that of our Sun's core.

The HL-2M Tokamak, China's new-generation "#artificialsun," goes into operation and has achieved its first plasma discharge. The apparatus will provide clean energy through controlled nuclear fusion. Watch the video to find out more! pic.twitter.com/1E7amzi8EZ

But in the Korean case, a tokamak with superconducting magnets, the temperature touched, equal to 100 million degrees, was maintained for 20 seconds, exceeding the 10 second barrier typical of normal conduction.

The devices, on paper competitive with each other, actually promise to contribute together to build one way to produce clean energy with the aim of forgetting fossil sources forever.

Wind turbines also release SF6, one of the most harmful greenhouse gases

Photovoltaic in L'Aquila: the new buildings of the CA.SE project presented live on the web

Cold Fusion: The E-cat will initially only be for companies

Transparent photovoltaic to produce energy from the windows

add a comment of Even China towards the nuclear fusion reactor: it reaches temperatures equal to 10 times that of the Sun