End of a love: the 5 steps to face in order to smile again

When a love ends, the five stages to be faced in order to return to smile at life and love.

Just like in grieving, when a relationship ends there are five steps to take (not necessarily in succession) to return to smile at life and love


"When a love ends as mine ended, without a reason or a reason, without anything ... You feel a lump in your throat, you feel a hole in your stomach, you feel a void in your head and you don't understand anything": who remembers Riccardo Cocciante's song? It is a slow crescendo of anguish, rebellion, bewilderment, an attempt to broaden the gaze and then fall back into that painful hole. The end - suffered - of an important relationship can turn your life upside down. On the other hand, love made us infinite; we thought we were two, we looked at the world and we thought - of ourselves and of the world - also in relation to the other person.

When this image of a couple is suddenly questioned or shattered, instantly, unilaterally (so the decision to break up was not taken after a shared process of reflection and maturation, done together), the world can collapse on us. The breakup of a couple is one of the most stressful and even almost physically painful events: this is confirmed by our personal experiences and various researches including that conducted by Ethan Kross and published in Proceedings of the National Academy of Sciences, which demonstrated how the breakup of a relationship generates the same pain as a sunburn. Physical, burning.

What to do to get out of the torment, when a love ends? There are five stages that, in general, characterize the journey from the stunning of the news to the resumption of a "new life".

The first reaction is denial. The clear representation of this resistance, of the impossibility of understanding, of the refusal to see things as they are, is precisely Cocciante's song. It is not possible, there are no reasons why a love can end. And maybe that's not the case, maybe there's still another possibility. The bewilderment of the discovery produces a sort of mental confusion that does not help to make order, to which one reacts as if it were a bad dream from which one wants to wake up. It denies itself, just like in mourning. We turn to friends and relatives with whom we have particular harmony to find confirmation that no, it is not possible (or in an attempt to "extract" additional information) and perhaps in this repeating, and repeating, and repeating that it is born, it consolidates slowly plan the vision of the new reality.

Elaborating the denial, recognizing that this is really how things are, that love is over, takes time: to each his own. To put all the pieces back together and understand what happened, to give a new inner order.

In second phase often a reactive anger takes over. A sort of resentment towards the world, sometimes even frustration, when we feel misunderstood victims; or directed towards the person who "betrayed" us by shattering the idea we had of our relationship, destroying planning and the couple. Of course, anger can also be poured out on oneself, blaming oneself for not understanding and trusting. This emotion can be devastating, imposing and lead to aggressive and demeaning behaviors even if only verbally, vengeful. How dare he, with everything I've done for him or her? Do I make him pay for it? You are an X and Y person (with unique attributes). And so on. Recognizing it, in its various expressions, is the first important step. And then it must be "worked": for example, you can keep a diary in which to express your experiences, your thoughts, with the aim of letting them go (so that they can be transformed).

Then it arrives the plea bargain: but if I did this, if you hadn't done the other? Maybe it was that situation, maybe the responsibility for everything was that problem. If, if, if. They are attempts to better understand what happened, the last launch of the buoy in the hope of being able to bring home a happy resolution. Maybe not "as before" but still together, why not, we can work on it. It is the first moment in which, having finished trying to maintain the connection to the past, we "surrender" to reality and try to understand, still a little confusedly at the beginning, the reasons. 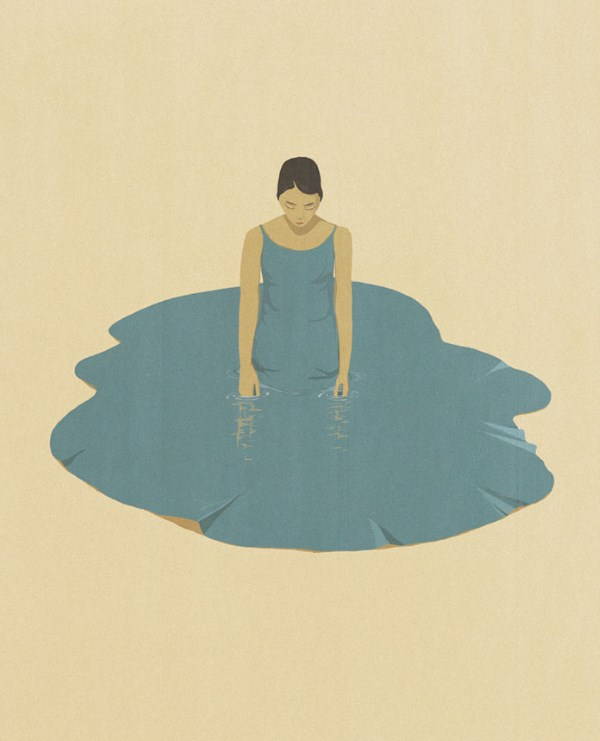 It is in the surrender to reality that we are in fourth stage of processing, a deep pain enters, slow. A sort of mourning depression (which in some cases can become pathological): we begin to process the lack, to feel its weight and the deeper meaning of what has happened. There is nothing to do but stay with this pain, welcoming it: it is physiological, natural. Only by “passing through it” can one truly leave it behind and grasp its teaching. And this is also the phase in which, in order not to feel pain, they throw themselves into new adventures: with the idea that "nail press nail”, Other people are used to distract themselves, not to feel their emptiness and pain. Every night, in a different bed. Or thereabouts. Apparently it works right now. But it ends up being internally impoverished.

E then finally comes acceptance. "One of the consequences of the end of an important relationship - says psychiatrist Raffaele Morelli - is that it brings us back to us, to regain possession of a new identity". From the darkness we can finally rise with new and renewed, authentic, capacity to love. There may be some repercussions, of course, but basically the experience has been treasured in a constructive way. It is no longer possible to control the behavior of the former partner from afar, perhaps on social networks or whatsapp; mutual friendships are no longer used as spoilers; they no longer ask for advice on how to fix the situation, to get back together. The time of acute pain has passed, even that of the deepest and slowest pain. We begin to look beyond. Like a seed thrown into the black depths of the earth, far from the ear of which it felt a part, which little by little lets itself go and transforms itself by the energies of the elementals, and thus opens up to a new life.

It goes without saying that these stages are not necessarily linear, in succession. On the contrary. They alternate, overlap. It is a process that also depends on emotional skills; from our social, emotional, personal resources; from the moment of life we ​​are facing. Knowing them, however, helps us to identify them: knowing where we are is always the information necessary to then go, whatever - in our intentions - objectives and goals are.

add a comment of End of a love: the 5 steps to face in order to smile again